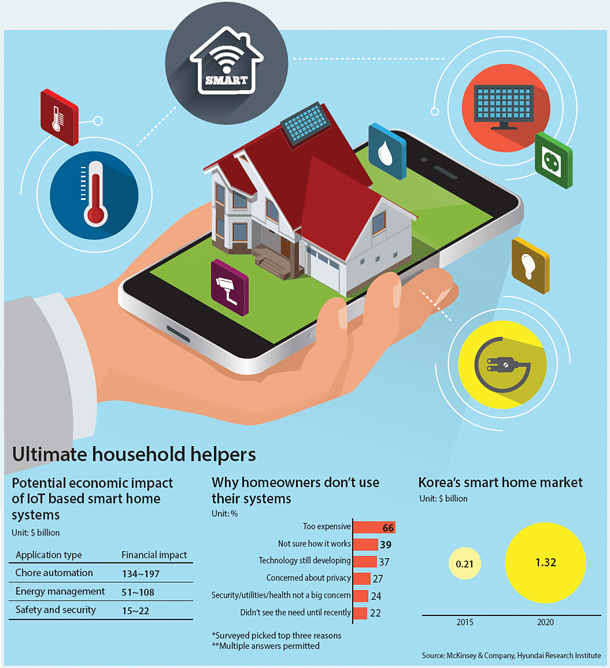 Korea’s smart home industry has come a long way since 2003, when home networking systems were first introduced by major apartment developers in line with a government plan to digitalize the nation. More than a decade after, it is common to find apartments equipped systems that control lights and heating and cut down on energy usage.

But criticism persists that they don’t yet meet householders’ needs - or do much to slash utility bills.

EzVille, an information technology subsidiary of GS E&C, introduced a home networking system in its Bangbae Xi complex in Bangbaedong, southern Seoul, in October 2003. Promising a “high-quality lifestyle” to residents, ezVille’s system allowed people to control their apartments from a wall pad in their living room. The wall pad was a central hub that controlled air-conditioning, heating and electricity as well as calling the elevator or buzzing visitors in. The pad also sent out alarms in cases of fires or gas leakage.

E-Pyeonhansaesang, an apartment complex brand built by Daelim, offered a similar system in 2003. Daelim’s smart home system has evolved over the past 13 years to the point in which the company began installing renewable energy sources in some residential complexes. Each building in an E-Pyeonhansaesang complex being built in Masan-dong Gimpo, west of Seoul, for instance, will be equipped with solar panels on its roof. The electricity created by the panels will be used to power the elevator and hallway lights of the building, cutting the management fee bill that residents have to pay, which includes the use of electricity in common spaces. The apartment is due to be finished in May 2018. 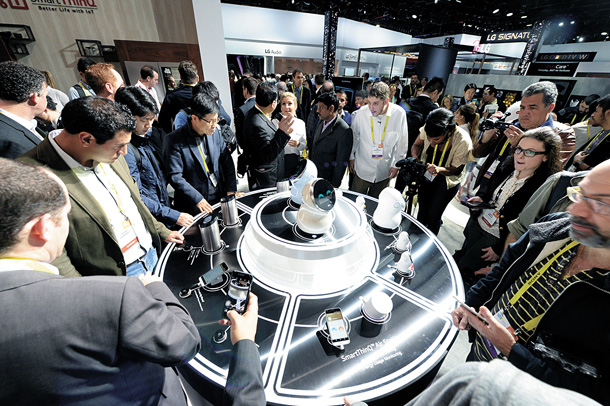 Lower utility bills is the most compelling feature of the systems. During last summer’s heat wave, Koreans were bombarded with bills that jumped by an average of nearly 12 percent. Although the government tried to reduce the bills through various measures such as a new electricity pricing system, people wanted more relief. Recently, a well-known Korean actress exposed how utility costs were unfairly distributed among the residents of certain apartment complexes. The actress and some of her neighbors even got into a physical brawl.

Another government effort to trim energy bills came this month when the Ministry of Trade, Industry and Energy announced a plan to launch a pilot project this year to demonstrate how smart home system can save energy.

“We will designate two apartment complexes, a thousand units each, and equip them with smart home systems,” explained an official from the Trade Ministry. The ministry said LH Corp, a state-own construction company, will join forces with LG Electronics and bring onboard Internet of Things technology to improve people’s everyday lives.

The blueprint of the project got good marks by some experts in the industry.

Ji Yong-gu, a professor of information and industrial engineering at Yonsei University, said the system may be able to address energy use and help residents bring down their electricity bills.

The foundation of the plan is the personalization of self-sufficient energy storage system (ESS) technology. LG Electronics will provide each unit with solar cells directly linked to the power outlets inside the house. The tech giant will also work with small and medium-size tech companies to supplement the units with other technologies. For instance, Teltron, a motion sensor maker based in Dajeon, will provide a light control system, whose sensor detects physical movement of the residents to automatically control lighting. The entire system will be controlled by LG’s cloud service.

An LG spokesperson explained that the products it is utilizing are either self-developed and those of SMEs that it signed memorandums of understanding with. The Trade Ministry estimates that the pilot project will reduce utility expenses of the households by 10 percent to 20 percent.

The accumulation of technologies from various sources and the ease of the systems’ operations are in line with the concept of smart home systems.

“What the Trade Ministry, LH Corp and LG are presenting here is the application of renewable energy technology,” said Ji. “It’s about producing environmentally friendly energy and providing it to each household while doing so more autonomously. People are relieved of the hassle of trying to figure out how to take advantage of the system. In a broader spectrum, we can safely say that this is a part of smart home system.”

As hopeful as the plan looks, many Koreans remain skeptical about the systems they have in their homes.

Choi Hyung-won, a 23-year-old college student living in the Banpo Xi complex in Banpo, southern Seoul with her family, expressed frustration with the system in her apartment. She told the Korea JoongAng Daily how her family could not figure out how to put the system into practical use to lower their electricity bill last summer. When she was trying to figure out how to use it, Choi said, she had to wait a few days until the system provider fixed a network error. “My family uses the wall pad in our living room to call the elevator and that’s it,” she said.

Analysts say that while companies are in fierce competition to innovate and bring new technologies to the market, they cut corners in making the systems practical and easy to use.

“This idea has been around for years,” said a professor of electrical engineering and computer science at a Korean university. “Basically, the current system requires a person to stay vigilant and go out of their way to intentionally and continuously take advantage of the technology. People may be willing to do that at first out of curiosity but eventually they get bored with such an inconvenient system.

“To actually increase the practicality of the systems, IT companies must work closely with construction companies,” he said.

“But construction companies in Korea don’t seem to have any interest in getting involved in the IT sector. Smart home systems should be embedded into apartments, which means construction companies must include the system in their apartment design and install them when building the apartment. But for them, having a smart home system is more like a marketing scheme to get people interested in buying their apartments.”

Still, analysts are hopeful that in future more practical and sensible system will emerge.

“Looking outside of Korea, there are some countries that have smart home models that can save energy up to 20 to 25 percent,” said the electrical engineering professor. “This shows it could actually work.”

Singapore, for example, launched a Smart Nation program in 2014. The government has begun equipping residential areas with in-home sensors that monitor air conditioning usage. The Digital Trend writes, “This sensor-enhanced model will give insights into potential water leaks and pinpoint inefficient appliances.”

Analysis by leading consulting firm McKinsey & Co. is also hopeful. In its report “The Internet of Things: Mapping the Value beyond the Hype,” McKinsey described the ideal form of smart home for energy management in this way: “Using sensors and predictive algorithms, smart thermostats can detect when no one is home and adjust the temperature to conserve energy. Over time the smart thermostat could learn about usage patterns and adjust heating or cooling to have the home at the right temperature when residents are due home.”

According to the company’s estimation, IoT applications in the home may have an economic impact - including consumer surplus - from $200 billion to $350 billion per year by 2025, or $110 billion per year in energy management alone.

Think tanks in Korea expect the size of the Korean smart home market to continue to grow in line with McKinsey’s estimate. Hyundai Research Institute forecasts that the market will reach $1.3 billion by 2020, citing rising consumer demand.