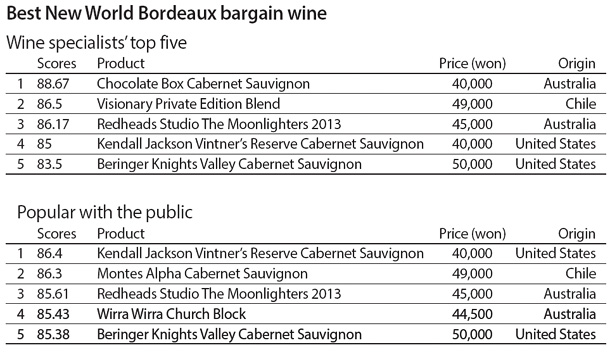 Bordeaux is one of the two standing pillars of French wineries, along with Burgundy. The dominant grape grown in Burgundy is pinot noir, a variety known for its small fruits and difficulty to cultivate. Pinot noirs are soft in taste, more expensive and are only produced in small amounts. Bordeaux red wine, on the other hand, is famous for its mixture of the widely known variety merlot and other kinds of grapes like cabernet sauvignon and cabernet franc.

Wines made in this region have strong and masculine flavors, vary in price and are produced in large amounts. They are also produced in wine producing regions in Latin America, the United States and Australia.

As part of the “Wine Consumer Report,” the JoongAng Ilbo chose Bordeaux blend wines between 30,000 won and 50,000 won. These products are gaining popularity worldwide for their cost-effectiveness.

Meritage wines, Bordeaux-style blends from the New World, in this price range account for the biggest pie in Korea’s wine market. Analysts predict that the market will grow bigger thanks to the antigraft law that limits the price of gifts. 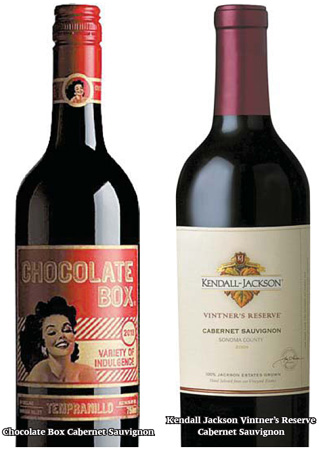 The evaluation was conducted by 10 wine specialists and 110 diners at a restaurant in Deungchon-dong, western Seoul. A total of 27 wines were evaluated: 14 Chilean, five from the United States and Australia, two from South Africa and one from Argentina.

Three bottles made both the lists of wine specialists and tasters. Although half of the bottles were Chilean, only two made the top five lists. American and Australian wine, on the other hand, had two bottles each on both lists.

Those who participated in the evaluation found “the hazelnut and coffee scent” appealing. The Montes Alpha Cabernet Sauvignon, one of the most widely known New World wines, came second with only a slight difference of 0.1 point from first.

Redheads Studio The Moonlighters 2013 from Australia and Beringer Knights Valley Cabernet Sauvignon from the U.S. each took up the third and fifth ranks in both lists.

“New World wine is fruitier compared to Old World wine and has a sweetness that appeals to wine beginners,” said CEO Park Sang-hoon of Vino Lab, which developed a mobile app that provides information on wine and assisted the evaluation. “Results showed that the U.S. and Australia are popular origins for New World wines of this price range.”