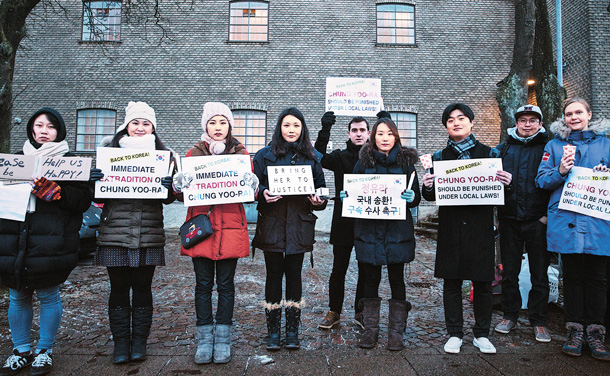 In front of the detention center where Chung Yoo-ra is held on Jan. 13, a candlelight rally is held demanding her repatriation. About 20 overseas Koreans and locals exclaim, “Yoo-ra, let’s go back to Korea!” [LEE HYUN]

AALBORG, Denmark - As soon as the immigration officer at Aalborg Airport in Denmark heard I was a reporter from South Korea, he said, “Oh yeah! You’re here because of that Korean woman, right?”

I wasn’t sure whether to feel relieved or ashamed. This was how I came to meet Chung Yoo-ra, the 21-year-old daughter of Choi Soon-sil, the individual at the center of the national influence-peddling scandal in Korea. After word on her arrest on Jan. 1 in Aalborg spread, Korean reporters flowed to Denmark in a steady stream.

With a cold front over Europe, the damp sea air of Aalborg was unusually chilly. The city was in commotion in the morning with the cacophony of cars passing by on the snowy roads. The local media were reporting on “Yoora Chung.”

Police warned reporters, “If you enter the building, we’ll haul you in.” The Aalborg detention center’s entrance was obscured, but one could just follow the stream of Korean reporters holding mics and cameras. There were more Korean reporters than the 20 overseas Korean residents of Aalborg.

Difficult as it was to meet Chung and her associates, Denmark’s winter was worse. Hearing the nickname “the Northern European Paris,” one special correspondent of Paris bluntly said, “I firmly believe Paris is far better.” An overseas Korean resident said, “For a spendthrift such as Chung Yoo-ra, it would definitely have been difficult to enjoy her time [in Aalborg].”

The Denmark public prosecutor’s office and the extradition taskforce overseeing the issue of Chung’s repatriation were based in Copenhagen, a commute of four hours and 30 minutes by train or an hour by plane from Aalborg. “Before the end of the detention limit on Jan. 30, the decision on South Korea’s extradition request will be concluded,” said Mohammad Ahsan, deputy director of Denmark’s office of the Director of Public Prosecutions.

In extradition law, those who face capital punishment, life imprisonment or a minimum of one year imprisonment will be repatriated or the foreign country can file a request for extradition. If the Danish prosecution sentences Chung to at least one year of imprisonment for her deeds in Korea and Germany, then based on Danish law, Chung will meet the requirements for mandatory repatriation.

There are three criminal charges against Chung: her unjust admission to Ewha Woman’s University and receipt of special treatment in her classes, obtaining a horse from Samsung by unethical channels and collaborating with Choi Soon-sil, her mother, in a money-laundering scheme through a German front company.

On the way to the Danish Court of Justices, Chung met with reporters and defended herself. In regards to the charge of preferential treatment, she said, “My mother did everything as she wanted.”

Getting in touch with Chung’s attorney wasn’t easy. Visiting Chung was prohibited and her attorney was the sole person with the privilege to contact Chung. On Jan. 2, her attorney, Jan Schneider, attended the inquest for the extension of detention at the district court in Aalborg. Initially, Chung was said to have made use of a public defender, but the criminal defense attorney belongs to Denmark’s third or fourth ranked law firm TVC. However, Schneider resigned shortly after and Peter Martin Brinkenberg, who had worked previously in economic affairs in Copenhagen, became Chung’s attorney.

Citing Schneider’s difficulty in traveling to Aalborg, Brinkenberg was temporarily hired in Schneider’s stead. Brinkenberg cost at least 500,000 won ($429) per hour and the legal fees resulting from the inquiry, investigation of the case and the drawing up of documents were expected to total tens of millions of won.

“I was given direction not to say anything to the press,” Brinkenberg said. “If the situation changes, I will get in touch.”

Staff at the legal office at Copenhagen also said, “We will not speak with reporters,” and quickly shut the door.

On Jan. 13, there were about 20 overseas Koreans, from places such as Copenhagen, London, and Sweden, gathered with locals carrying candles in front of the detention center in Aalborg. Like the weekly Saturday rallies held in Gwanghwamun square in Seoul, they were picketing, saying, “Yoo-ra, let’s go back to South Korea” and “Instead of pizza, eat some [Korean food].”

At the Aalborg detention center one has the luxury to order in pizza. The individual to first propose a candlelight vigil was an overseas Korean residing in Sweden named Lim Ji-hye.

“Compared to Northern Europe,” she said, “our country is still at a stage where we do not have democracy. I think that this is something we must experience as democratic growing pains.”

“As long as I can be together with my child,” Chung said after being detained, “I will immediately return.”

But this was a factor the Danish prosecution could not consider. Meeting Ahsan on Jan. 7, the prosecutor said, “Whether there’s a child or not is irrelevant to the decision.”

“We do not have an obligation to tell you anything,” said Simon Gosby, public information officer for the prosecution, when asked about the investigation. “This incident is something Korea will have to resolve,” said one local Dane. “Denmark should not intervene. It’s better if Chung is repatriated as soon as possible.”

Aalborg’s Nordjullands police department was given instructions by the prosecution, met with Chung, confirmed the request for repatriation and heard her statements. It is expected the Danish prosecution will decide by the end of the month.