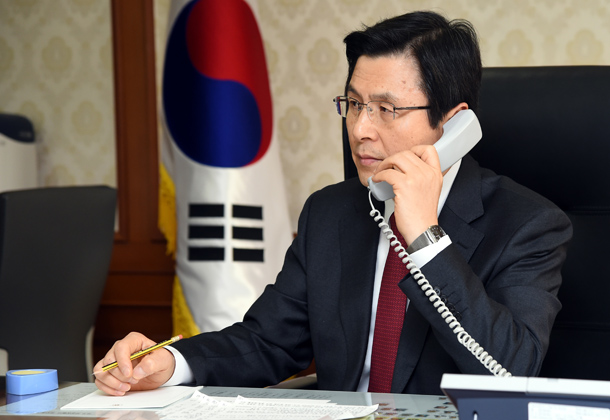 “The two discussed the importance of the U.S.-Republic of Korea [ROK] alliance,” it said. “President Trump reiterated our ironclad commitment to defend the ROK, including through the provision of extended deterrence, using the full range of military capabilities.”

The statement confirmed the two leaders agreed to “take steps to strengthen joint defense capabilities” to defend against possible threats and provocations from North Korea, and also discussed the upcoming visit of U.S. Secretary of Defense James Mattis to Korea.

“The conversation took place at the request of the White House,” said an official of the Prime Minister’s Office. “It was the first time that Trump spoke with Hwang after his inauguration.”

North Korean leader Kim Jong-un said in his New Year’s Day address that the regime had entered the final stage of preparations to test-fire an intercontinental ballistic missile, an apparent threat to the United States and South Korea.

“The U.S.-Korea relations have developed into a comprehensive and strategic alliance in the past 60 years and must be strengthened further,” Hwang told Trump, according to the Prime Minister’s Office. “Should there be a North Korean provocation in the future, the United States and South Korea will have to respond strongly together.”

The Prime Minister’s Office in a press release on Monday said that Trump responded by saying the United States will be with Korea “100 percent” of the time, and that the U.S.-Korea relations will be “better than ever before.”

The two also reportedly discussed the U.S. Terminal High Altitude Area Defense system to be installed in Korea to counter the military threats from the North.

According to the White House, in some 30 minutes of conversation, Hwang also conveyed his congratulations to Trump on his inauguration and the U.S. president wished Hwang and the South Korean people “a prosperous and happy lunar new year.”

The phone conversation between the U.S. president and Hwang came seven weeks after President Park Geun-hye was impeached by the National Assembly over a power abuse and corruption scandal involving her and her friend Choi Soon-sil.

Hwang has been serving as acting president since, though some critics have questioned the extent and power of this role. Hwang has been criticized by some politicians as a possible dark horse in the upcoming presidential election using his new position to his advantage.

“It is troubling to see Hwang, an acting president, taking the role for more than it actually is,” Rep. Chang Je-won of the Bareun Party said in a written statement. “[Though he is not the president,] he hosted the New Year press briefing and now is holding talks with leaders of other countries.”