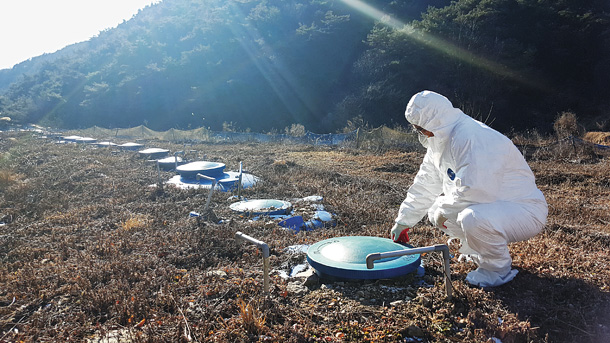 A public official of Hapcheon County Office is examining a fiber-reinforced plastic (FRP) case that contains bodies of buried chickens at a landfill in Hapcheon, South Gyeongsang, on Jan. 23. Though three years have passed since the chickens were buried, their bodies inside the FRP cases have not decayed much over the years, calling for costly reburials by local governments and health authorities. [WE SUNG-WOOK]

More than half the infected animals buried alive to control the spread of highly pathogenic diseases like avian influenza and foot-and-mouth disease did not decay properly in the past three years, leaving the country at risk of possible secondary contamination.

The JoongAng Ilbo, an affiliate of the Korea JoongAng Daily, visited a landfill in Hapcheon County of South Gyeongsang on Jan. 23. The site had a breakout of avian influenza in March 2014 and buried 33,186 chickens in 20 fiber-reinforced plastic (FRP) cases.

Though the reporters and site manager were all clad in protective clothes and masks, they could not block the putrid smell that gushed out of the plastic case as they opened it. None had decayed properly.

The situation was similar in another landfill the JoongAng Ilbo visited in Icheon, Gyeonggi, on Jan. 12, where 453 pigs infected with foot-and-mouth disease were buried in four FRP cases in February 2015.

This finding is contrary to what the Ministry of Agriculture, Food and Rural Affairs believed when it started using the FRP cases to bury animals. The practice of burying animals in FRP cases began in 2012 and the ministry at the time said, “the animals buried inside FRP cases will decay within six months to a year.” The FRP cases were meant to contain liquids from spreading underground and infecting the water supply.

“We didn’t conduct detailed research on the FRP cases,” said Lee Yong-jin, an official of the Animal Health Management Division of the Ministry of Agriculture, Food and Rural Affairs.

The FRP cases were widely used from 2014. Among 1,203 landfills throughout the country, 726 used the FRP cases. According to the Ministry of Agriculture, Food and Rural Affairs, 22.8 million chickens, ducks, cows and pigs out of 48.65 million were buried in FRP cases.

This news is troubling for health authorities. After three years, owners of landfills may use the land according to their needs. This means landfills that used FRP cases from January 2014 have reached their due dates in this month.

“The FRP cases have devices that allow air to enter the cases to help the bodies decay,” said Park Gwang-sang, head of the disease prevention department of the Livestock Division at the South Gyeongsang provincial government. “They failed to work, killing bacteria that would have led to proper fermentation and decay of the bodies.”

“When the animals are buried inside the FRP cases, quicklime is thrown in,” said Ahn Gyeong-joong, head of a think tank that researches sustainable landfill usage. “The quicklime must have not only have killed the viruses but also the good bacteria.”

The reburial process will cost the government dearly.

In the case of Hapcheon, it cost 34 million won ($29,190) for authorities to cull and bury the chickens in 2014. This year, as the landfill’s three-year expiration ends, health authorities will have to rebury the bodies using an alternative measure, whereby animals will be buried in a hole 5 meters (16 feet) deep, along with quicklime to kill the virus and rice husks to absorb liquids.

Though this cannot completely prevent liquids from contaminating the underground water supply, it is the only alternative to using FRP cases, according to health authorities.

For the landfill in Hapcheon, the reburying procedure will cost some 157 million won, five times the cost of the FRP procedure. Reburying animals from 726 landfills that used the FRP cases will cost a total of about 72.6 billion won, according to companies that specialize in landfill management.

A farm in Jincheon County in North Chungcheong buried 325,994 ducks and geese after the avian influenza was detected among them in 2014. They were buried in FRP cases and had not decayed much.

“It’s troubling enough that there are no companies that specialize in reburying,” said Kim Gwang-jin, head of the animal health management department of Jincheon County Office. “But now we have to come up with a 120 million won budget to carry out the reburying procedure.”

A farm in Anseong, Gyeonggi, also needs to rebury the 22,340 fowls buried in FRP cases in 2014. Anseong city government officials said they do not have enough funds for this yet.

“We can try to negotiate with landowners to extend the burying period by two more years,” said Lee Hyo-seok, head of an emergency response team at the livestock division of the Anseong city government. “But we will be faced with the same problem in two years. And we never know if the landowners will cooperate.”

To make matters worse, the highly pathogenic avian influenza continues to spread throughout the country. On Jan. 24, a farm in Pocheon, Gyeonggi, reported the death of 130 chickens. Health authorities confirmed they were infected with avian influenza.

Pocheon houses 10.14 million birds in 225 farms, and is known as the center of chicken and duck farming in the country.

The Gyeonggi provincial government and Pocheon city government decided to bury 110,000 chickens at the farm, as well as 18,000 more within a 500-meter radius. Depending on how much the virus spread, some 1 million birds bred within a 3-kilometer (1.86-mile) radius from the farm are also at risk of being buried.

The city had already buried last year 2.55 million chickens in 31 farms when the highly pathogenic H5N6 avian influenza virus was found among them.