Giants’ Lee says he only cares about the team

Giants’ Lee says he only cares about the team 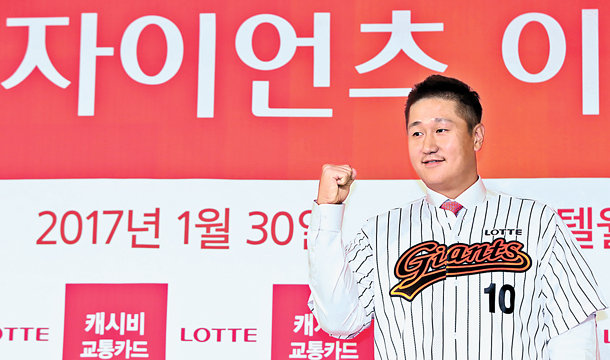 Having rejoined his hometown club after a year in Major League Baseball (MLB), Korean slugger Lee Dae-ho said Monday he will put aside personal glory in the hunt for a postseason berth.

Lee, who spent last season with the Seattle Mariners, signed a four-year deal worth 15 billion won ($12.7 million) with the Lotte Giants in the Korea Baseball Organization (KBO) last week. It was the largest contract ever handed to a free agent in the KBO’s 35-year history, and reunited the 34-year-old with the team based in his native Busan, some 450 kilometers (280 miles) southeast of Seoul.

Lee had his first tour of duty with the Giants from 2001 to 2011, winning an MVP and two Triple Crowns along the way, before playing in Japan and then in the United States.

At a press conference in Seoul addressing his return, Lee said he felt he found “the perfect timing” to rejoin Lotte, and that money was only of secondary concern.

“I’d thought all along that I wanted to come back to play before Lotte fans,” he said. “If it wasn’t this year, I’d have had to wait a few more years, and the fans would’ve grown tired of waiting for me.”

Lee was the face of the Giants franchise and one of the KBO’s most feared sluggers. He hit .309 with 225 homers and 809 RBIs in 1,150 games. From 2008 to 2011, Lee guided the Giants to four consecutive postseasons, and was voted the KBO MVP in 2010 after leading the league in seven major offensive categories.

With the Mariners, Lee batted .253 with 14 homers and 49 RBIs in 104 games, while platooning at first base with left-handed hitting Adam Lind.

Upon his return, Lee was quickly named the Giants’ captain and said he’ll be all about the team this year, especially since the Giants haven’t been to the postseason since 2012.

“I’ve not thought about my personal stats for this season,” he said. “I think we should be higher than the fifth seed (the last playoff spot). And if we all play hard for the team, then the stats will follow.”

Asked who he felt would be key players, Lee smiled and said: “I should be one of them. As the leader, I have to set examples for the younger guys. I’ll work twice as hard as everyone else.”

Lee said he’d been the “tough” veteran in the past but will try to adopt a different, softer leadership style.

“I’ll be praising our young players so that they can have more confidence,” he added. “If I keep my mind open, I think the guys will follow me.”

Lee denied rumors that he still held a grudge against the Giants’ front office after losing his salary arbitration in 2010. He was coming off an MVP season, and demanded 700 million won ($602,000) as his annual salary. The club offered him 630 million won and wouldn’t budge.

Lee ended up signing for 630 million won and left the Giants for Japan after 2011.

“I actually filed for arbitration precisely because I didn’t want to fight the club,” Lee said. “I lost it, and I accepted the result. I never had any hard feelings then and don’t have any now.”

Lee said he is looking forward to sharing some of the lessons he’s learned playing overseas with his teammates.

“In the past, I only had to worry about baseball, but as a veteran, I have a lot more on my plate now,” he said. “But one important thing I’ve learned playing in foreign countries is that we all have to have fun playing the game. I want to be able to smile a lot at the ballpark and make our fans smile too.”