Son says from now on, his focus will be on the WBC

Son says from now on, his focus will be on the WBC 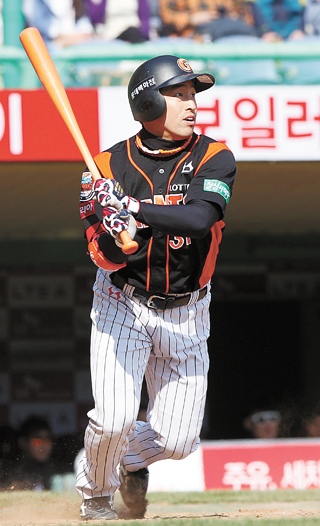 Korean outfielder Son Ah-seop said Tuesday he is ready to put his team first instead of showcasing his skills in the upcoming international baseball tournament.

Son was added to South Korea’s 28-man roster for the World Baseball Classic (WBC) earlier this month after Baltimore Orioles’ Kim Hyun-soo pulled himself out of consideration to focus on his Major League Baseball (MLB) club.

Son, who plays for the Lotte Giants in the Korea Baseball Organization (KBO), said he is willing to help South Korea in any given situation.

“Being on the national team always makes me excited and gives me a big responsibility,” Son told reporters at Incheon International Airport before departing for the national team’s mini training camp in Guam.

Although he joined the national team as a late replacement, Son has been one of the premier hitters in the KBO. The 28-year-old is second among active KBO hitters with a career .323 batting average and has hit at least .300 in each of his past seven seasons.

Two years ago, Son tried to sign with an MLB club through posting, but he failed to draw any bid. The WBC, which kicks off on March 6, could serve as a good opportunity for Son to display his skills to major league scouts, but Son said he isn’t thinking about personal benefits.

“The WBC is not a showcase for foreign scouts,” he said. “This isn’t a tournament where you personally need to show off something. You have to help South Korea become well known on the world stage.”

Son will be training in Guam until Feb. 9 with nine national team members. They will then work with the rest of their teammates in Okinawa, Japan, from Feb. 12.

“I started my batting practice late because I joined the national team abruptly,” he said. “When I go to Guam, I will practice more than I usually do.”

South Korea is the host of the first round action of Pool A that features Israel, the Netherlands and Chinese Taipei. With St. Louis Cardinals closer Oh Seung-hwan being the only major leaguer on the roster and other KBO star players dropped due to injuries, some fans have showed their concerns about the national team, but Son said he isn’t bothered.

“I know that fans have lowered their expectations for the WBC,” he said. “But you never know what’s going to happen in baseball.”