A view inside North Korea

A view inside North Korea 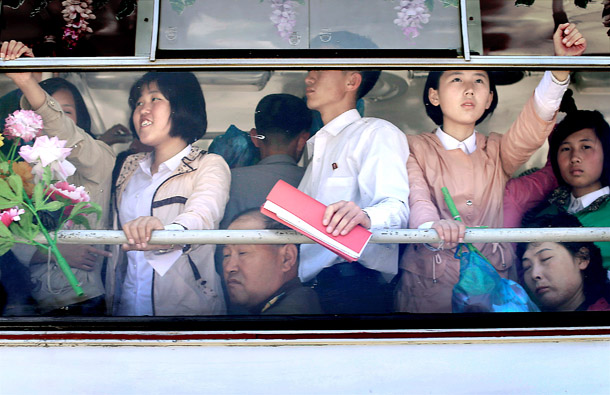 North Koreans ride an electric trolley in Pyongyang on May 7, 2016. [AP/YONHAP]

The diplomat-defector Thae Yong-ho has been outspoken in his views of the regime in North Korea. Through a variety of interviews with the press in South Korea, the former No. 2 in the North Korean embassy in London has revealed that there is much more internal criticism of the regime than the world may think, and that his decision to defect may reflect a broader and more deeply held view among the elite that the regime’s days are numbered.

What is most interesting about Mr. Thae’s comments is not that he might express criticism of the regime. Indeed, one would be surprised if those who make the decision to leave their country do not do so with a measure of anger, criticism and sadness. Indeed, what is most interesting is his suggestion that even those who choose not to defect are feeling apprehension and anger about the state of affairs inside the country.

A research project at the Center for Strategic and International Studies in Washington has recently been launched to gain a better understanding of what average North Koreans think. The premise of the project is that the defector population now numbering in the tens of thousands has given researchers a rich database from which to understand how the disenchanted feel about their former home. But this is a self-selected sample that one would expect to be critical of the regime.

The CSIS project, titled “A View Inside of North Korea, Moreover,” has attempted to ask average citizens their views on the regime. The findings are quite interesting. One hundred percent of those respondents, for example, admitted that they no longer rely on the government ration system for their daily lives and instead look to the markets to gain their sustenance. The realization that the state no longer provides what the citizens need is also evident in the finding that 97 percent of North Koreans know of someone who is critical of the government in private, an astounding percentage given the regime’s iron-clad Orwellian efforts to control the thoughts of its citizens. Indeed, when asked what element of the government is most dissatisfying to them, citizens responded consistently that they are angered by any efforts on the part of the state to undercut entrepreneurial activities or to try to extract private savings out of society.

It is a well-known observation that North Koreans along the border with China are exposed regularly to foreign information, but the CSIS study finds that this exposure is more widespread. Almost 92 percent of North Korean respondents consume foreign information at least once a month. This mostly likely occurs through listening to radio broadcasts from VOA, RFA or BBC and through foreign media thumb drives. In addition, 83 percent of respondents admitted that outside information was more useful to their daily lives than information from the government.

It should be noted that the sample of citizens who responded to questions represented a broad cross-section of North Korean society. The people were evenly divided between men and women and across a wide age group ranging from as young as 28 years old to as old as 80.

These individuals were not all city dwellers from Pyongyang who might be more affluent and therefore more aware of their relative deprivation compared with the rest of the world. Although education levels or party affiliation were unknown, they had occupations ranging from white-collar jobs like doctors and businessmen to blue-collar occupations like laborers, sauna workers, cooks and factory workers. Nor were they all from the porous Sino-Korean border where exposure to foreigners or foreign goods might be more plentiful. Instead, individuals came from a variety of regions, provinces and cities.

Given the nature of these sorts of interactions, it is difficult to gather a large sample size. After all, one cannot exactly conduct a Gallup-style telephone survey in the country given all the constraints by the state. But these findings — available on the CSIS website, BeyondParallel.CSIS.org — still offer an interesting window into one of the most opaque regimes in the world and highlight the importance that sources of outside information can have in helping the North Korean people.


*The author is professor at Georgetown University and Korea Chair at the Center for Strategic and International Studies in Washington, D.C.