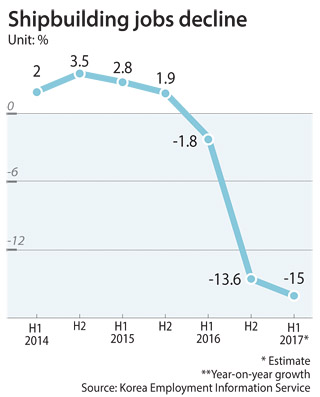 The government expects 27,000 jobs in the nation’s shipbuilding sector to disappear in the first half of this year as the global economy continues to be sluggish and Korea’s shipbuilders proceed with restructuring.

The job loss represents a nearly 15 percent drop from last year’s first half, the Korea Employment Information Service said Tuesday. The number of shipbuilding jobs has been falling since last year’s first half, when it dropped 1.8 percent year on year. The decline accelerated in the second half, when the number of jobs fell 13.6 percent year on year as indebted shipbuilders enacted their turnaround plans and cut jobs.

“The shipbuilding industry continues to be weak, and shipbuilders are expected to trim the number of employees this year as well,” said Kim Soo-hyun, a director at the Korea Employment Information Service. “The fall in number of employees might be bigger depending on how fast they proceed with their restructuring plans, and it appears that the number of workers at shipbuilding companies with more than 1,000 employees will drop more rapidly. By region, South Gyeongsang and Ulsan, where the shipbuilding industry is concentrated, will see more laid-off workers this year.”

The Ministry of Employment and Labor added that the number of available jobs in the shipbuilding industry is likely to drop with persistent slow growth and an oversupply of ships around the world.

Even though the number of shipbuilding workers is likely to fall in the first half of this year, the data showed the overall number of workers in 10 major industries in the country, including electronics, automobiles and finance, will increase by 0.7 percent, or 5,000 workers.

However, most of those jobs will be at small companies with less than 30 people, which tend to offer lower salaries and fewer benefits. The number of jobs at large companies with more than 1,000 employees will fall, according to the report.

By sector, the study predicted job losses in steel, fiber and display manufacturing in the first half. The number of employees in steel will likely decline by 0.7 percent, or 1,000 jobs. The report cited rising trade protectionism in the world. The figure for the fiber industry is expected to drop 0.3 percent due to relatively cheaper products manufactured by Chinese counterparts.

Automakers, on the other hand, will likely see the number of employees grow by 1.1 percent, and the figure for semiconductors is predicted to go up by 0.8 percent on the back of higher demand for the products.