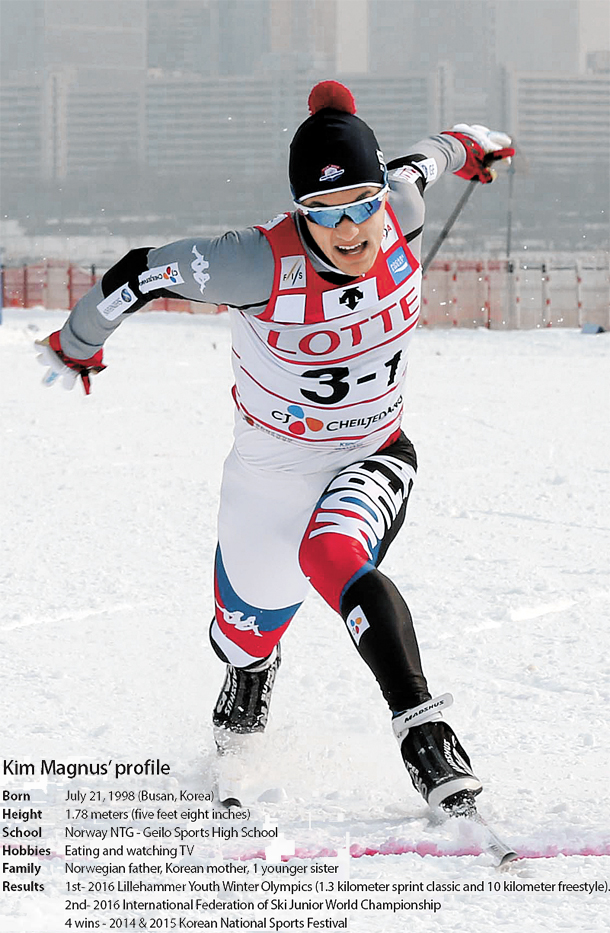 Cross-country skier Kim Magnus competes in the Seoul Cup on Jan. 19. Kim hopes to earn medals at the Sapporo Asian Games next month and finish in the top 20 at the 2018 PyeongChang Winter Olympics. [KIM SANG-SEON]

His addition to the team bodes well for Team Korea as it prepares to host the 2018 Winter Games in Pyeongchang, Gangwon.

“It snowed a lot. Seeing the road covered in snow excited me,” Kim said about his old town in Norway.

Having grown up in Geilo, a city in central Norway, it wasn’t unusual for Kim to see snow piling up as high as 60 centimeters (2 feet) each winter. Still, although it snows less, winter in bigger cities such as Seoul has left Kim in awe.

His name, Magnus, comes from a Latin word meaning “the best.” After choosing to represent Korea in April 2015, he won two categories at the 2016 Youth Winter Olympics and was a silver medalist at the 2016 Junior World Championship. With his accomplishments, he became Korea’s cross-country ski hopeful.

After winning the Seoul Cup sprint event at Ttukseom Island, Hangang Park, in Seoul last month by beating Nikolay Morilov (Russia), bronze medalist at the 2010 Vancouver Winter Olympics, he will be competing at the International Ski Federation (FIS) Cross-Country World Cup next month held in Pyeongchang.

As he turns 19 this year, he will legally be considered an adult and will be graduating from Norway NTG-Geilo High school in June.

“There’s a population of 3,500 people in the town where I go to school,” Kim said. “Only two to three movies are played once a week. All I do is eat and watch TV.” He tries to cook whenever he has time.

Kim’s hobby has been playing sports ever since elementary school. He did football, yachting, ice hockey, short track skating, triathlons and more. When he was in fifth grade, he biked from Busan to Seoul.

“I liked playing sports because if I put effort into it, then I got the reward and sense of accomplishment in return,” Kim said.

As an all-around athlete, his life changed when Pyeongchang was picked as the venue for the 2018 Winter Olympics in July, 2011. After all, skiing came to him naturally when he moved to Norway just a year ago. He then decided to become a cross-country skier with his eyes set on competing at the Olympics in his home country. After dominating the Norwegian events in every age division, he chose to represent his mother nation.

“I wanted to help with the Korean ski program,” Kim said. “My friends and my coaches in Norway supported my decision.”

Kim is also known for his unique hairstyle. He used to have short hair, but starting last season, Kim started to tie his hair up. Last year at the Youth Olympics, the IOC showed interest in his hairstyle by mentioning his ponytail.

“If I didn’t have this hairstyle, I probably would have gotten silver or a bronze medal instead of gold,” Kim said. “My hairstyle doesn’t help with the air, but it helps my mental game.”

This year, he kept his hairstyle the same as last year. “I enjoy watching football and I imitated Zlatan Ibrahimovic’s hairstyle because his unique hairstyle grabbed my attention,” Kim said. “Interestingly, after I changed my hairstyle, I had good results in tournaments.

“Now players from different countries are imitating my hairstyle and calling it ‘Magnus style.’ I think my hairstyle helped a lot with making myself known to the public.”

After winning the Seoul Cup event, he waved a Korean flag in the air. “The Korean flag reminds me of my mother,” Kim said. Next month, he will be competing at the Sapporo Winter Asian Games aiming for Korea’s first men’s cross-country gold medal. Kim’s main category is the short-distance sprint.

Turning 20 years old next year, Kim hopes to finish in the top 20 at the PyeongChang Winter Olympics, a stage that he considers more a festivity than a competition.