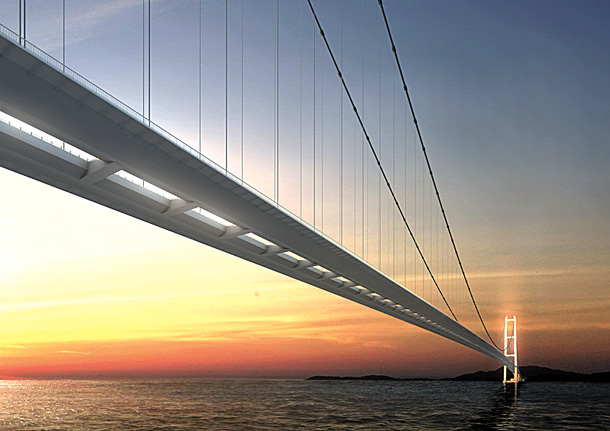 A computer-generated image of the Canakkale bridge in Turkey. [DAELIM INDUSTRIAL]

A construction consortium comprising Daelim Industrial and SK E&C has won a 3.5 trillion won ($3 billion) project to build a bridge in Turkey that is set to be the longest suspension bridge in the world once completed.

Daelim said the consortium was selected as the priority negotiator for the project on Thursday and is waiting for the letter of agreement from the Turkish state-owned contractor, the General Directorate of Highways. The company expects to sign the final documents as early as next month and start construction in March.

There were 24 bidders for the project, including a consortium from Japan comprising Itochu and IHI Corporation. Daelim Industrial and SK E&C teamed up with Turkish builders Limak and Yapi Merkezi and submitted a bid in late October. Both the Korean and Japanese governments offered diplomatic support to help their respective bidders win the Turkish government-led project. During a similar rivalry in 2013, a Korean consortium lost to Japan in a bid to build Turkey’s second nuclear power plant.

The proposed suspension bridge will span 3.7 kilometers (2.3 miles) and cross the Dardanelles Strait from the city of Canakkale. It is slated to be the longest suspension bridge in the world, surpassing Japan’s Akashi Kaikyo Bridge.

The Turkish government’s plan is to open the bridge by 2023, which marks 100 years since the republic’s founding. In commemoration of the anniversary, the bridge’s two towers will be set 2,023 meters apart.

Unlike other deals in which bidders receive construction fees and leave, the Canakkale bridge project is a build-own-transfer contract, which grants ownership to the subcontractor for a period of time after construction before handing the stake over to the government.

The period suggested by the winning consortium was 16 years. During this period, the four companies will operate the bridge, collect tolls and cover maintenance costs. “All four possess equal shares in the consortium,” a Daelim spokesman said, adding that details on how the profits will be divided have yet to be decided.

Industry analysts believe Daelim’s competence in building long suspension bridges, such as the 1.5-kilometer Yi Sun-sin Bridge in South Jeolla, and SK E&C’s experience with past Turkish projects were positive factors that appealed to local authorities.

“The outcome is meaningful for us because it was backed by the government,” a Daelim spokesman said.