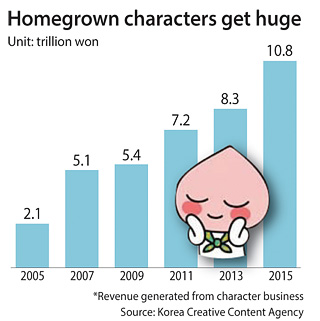 Mobile messaging has brought new life to the character industry in Korea - sales of anything related to cute characters created by animators or messaging apps - an industry long dominated by Japan and Walt Disney.

Korea’s character industry surpassed 10 trillion won ($8.6 billion) in revenues for the first time in 2015, largely thanks to characters developed by mobile messaging services KakaoTalk and Line, according to report issued by the state-run Korea Creative Content Agency (Kocca).

Korea’s No. 1 mobile messenger KakaoTalk recently opened the 20th branch of stores that sells stationary and lifestyle products featuring its characters in Daegu’s Shinsegae Department Store. It opened its first in Sinchon, western Seoul in 2014.

It even held an exhibition in Hongdae, western Seoul, last December dedicated to the back stories of its characters.

Line, a mobile messenger app operated by Naver, is spreading its character-based merchandise to other parts of Asia. It operates 31 shops in 11 countries, including Taiwan and Hong Kong. It opened a pop-up store in New York’s Time Square last year.

“The spread of smartphones and rapid growth of people who use mobile messenger apps lead to a simultaneous growth of the domestic character industry,” said an official at Kocca.

Exports of domestically made characters recorded $489 million in sales in 2015, 9.6 percent more than the previous year. The Kocca report said the export business has been rising since 2009, when only $236.5 million worth of revenue was exported.

North America took the largest portion, with 26.9 percent, followed by Europe and China, based on 2014 data.

A total of 1,542 entities existed in the business in 2009, which included character producers, retailers and those in charge of licensing.

Characters from webtoons, or internet-based comic strips, contributed to the recent surge in the domestic character industry.