Korean appliances lead in the U.S.

Korean appliances lead in the U.S.

Korean appliances are rapidly expanding their presence in American homes.

For the first time, Samsung Electronics has overtaken Whirlpool as the leader in the United States’ home appliances market, while its rival LG Electronics stood at third, according to data released Sunday by market share information provider TraQline.

It’s an impressive performance by Korean home appliance makers in the United States, considering that Whirlpool has long been thought of as a solid leader in the American market. But last year, Samsung beat the U.S. giant with 17.3 percent market share, expanding by 3.5 percentage points. Whirlpool went down to second place with 16.6 percent, closely followed by LG with 15.7 percent. 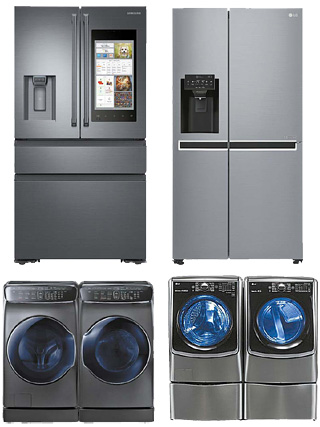 Unlike in the past, when Korean home appliances were low-priced and barely generated margins for companies, the companies have been doing especially well in premium home appliances.

For instance, Samsung’s share of French-door refrigerators, which have four doors and are considered the most high-end and costly refrigerators, was 30.8 percent, according to TraQline. That’s nearly twice the share that Samsung has for overall home appliances. LG also accounted for 22 percent of the high-end refrigerator market.

And in washing machines, where Whirlpool has long been a dominant player, Samsung and LG have entered the market with larger, more expensive front-loading models. For front-loading washers above $900, Samsung took up 25.4 percent of the market, LG 29.2 percent and Whirlpool 11.9 percent. “It is this competition and threat that triggered Whirlpool to sue Samsung and LG on alleged dumping of washing machines produced from Chinese factories,” a source from the home appliances industry said.

Technological advancement and speed of development were two pillars that supported the growth of Korean companies. Every year, rivals Samsung and LG have competitively released refrigerators and washing machines with ever higher capacity, and attracted American consumers with a particular liking for large-storage products.

The earnings reports of the Korean giants are reflecting their success in America. Samsung made 47.05 trillion won ($40 billion) in sales and 2.64 trillion won in operating profit through its consumer electronics business last year. The total itself might be a small portion of Samsung’s whole earnings, but compared to the 0.9 percent profit-to-sales ratio in 2010, the 5.6 percent ratio last year is a big jump. In the past six years, revenue has decreased by 10.2 trillion won while profit has grown over five times.

“Last year, Samsung released the AddWash washing machine and Family Hub refrigerator, while LG released the new TWIN Wash washing machine, which all have been big hits,” said Noh Geun-chang, a senior analyst at HMC Investment Securities. “The fall of raw material prices has also pushed down production costs. Korean companies’ past, when they went to war over prices and gave up on margins, is not likely to be repeated.”