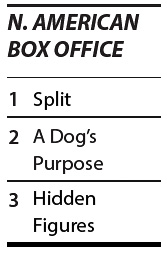 LOS ANGELES - Opening in theaters amid controversy over animal treatment on set and calls for a boycott, “A Dog’s Purpose” still managed to earn $18.4 million, according to studio estimates Sunday.

Tracking expectations had pegged the family film to open in the mid $20-million range, but it had a healthy debut nonetheless for a movie that cost only $22 million to produce.

Representatives of Universal Pictures, which distributed the Amblin-produced film starring Dennis Quaid, say the opening was in line with their hopes.

Audiences gave the film an “A” CinemaScore, indicating that word of mouth should be positive going forward.

“It’s a great start for what I think is going to be a long-term playout on the title,” said Nick Carpou, Universal’s president of domestic distribution.

Rounding out the top five were “Hidden Figures” in third with $14 million, new opener “Resident Evil: The Final Chapter” in fourth with $13.9 million, and “La La Land” in fifth place with $12.1 million.