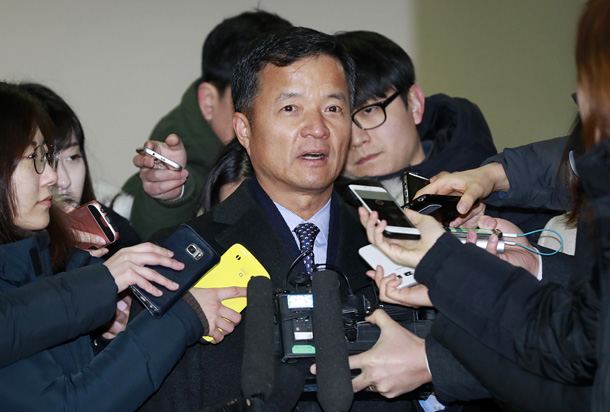 Korean Ambassador to Myanmar Yoo Jae-kyung is surrounded by reporters as he enters the independent counsel’s office in Daechi-dong, southern Seoul. [YONHAP]

President Park Geun-hye had appointed a former Samsung executive as Korea’s ambassador to Myanmar at the recommendation of her controversial friend Choi Soon-sil, the independent counsel investigating the abuse of power and influence-peddling scandal involving Park and Choi said Tuesday.

“Ambassador Yoo Jae-kyung now admitted that he was appointed at the recommendation of Choi,” assistant independent counsel Lee Kyu-chul said Tuesday. Yoo, appointed as the top envoy to Myanmar, returned to Korea earlier in the morning and was questioned by the investigators.

Before attending the questioning, Yoo denied his connection to Choi. “I still don’t know who recommended me,” he told journalists before the session. “I vividly remember what President Park told me when she gave me the letter of appointment. She said a civilian government will take place in Myanmar and there is a possibility to expand bilateral trade, so she invited an expert in trade, not a career diplomat, for the job.”

Despite his initial denial, Yoo admitted to the investigators that he had met with Choi multiple times before his appointment, Lee said. “He admitted that he was appointed to the post at the recommendation of Choi,” Lee said. “There is not a high possibility that Yoo will become a suspect. But we will seek an arrest warrant for Choi for influence-peddling.”

Choi, prosecuted in November on charges of coercing conglomerates to make massive donations to two nonprofit foundations that she practically controlled, is currently undergoing a separate investigation by the team of independent counsel Park Young-soo. Additional charges include that Samsung Group’s support for her daughter’s equestrian training is actually a bribe to Park through Choi, in return for the president’s influence in a state-run pension fund to support a controversial merger of two Samsung units that it invested in. The president, impeached in December, was named a co-conspirator by the prosecutors and the independent counsel.

A new charge unveiled this week was that Choi sought profits in an overseas development assistance project in Myanmar.

The Korean government planned to invest some 76 billion won ($64.5 million) to build a commercial town in the Southeast Asian nation to assist Korean companies’ business there. The project was to be managed by the Mi-R Foundation, controlled by Choi. The project has been put on hold since August.

Yoo, a former executive of Samsung, was appointed as Korea’s ambassador to Myanmar in May 2016. Before the appointment, he worked at the marketing and sales departments of Samsung Electro-Mechanics for 30 years.

While Yoo was not the first business executive to be appointed as an ambassador, the selection was received as extraordinary in the diplomatic community at the time. Yoo’s overseas postings with Samsung were all in Europe, and he had never visited Myanmar before the appointment.

The Ministry of Foreign Affairs said Tuesday that it has no knowledge of how Yoo was appointed as ambassador.

Under the Foreign Service Officials Act, the president may appoint a person with ability as a diplomat and a specially appointed chief to perform foreign affairs. “Yoo is a specially appointed ambassador,” ministry spokesman Cho June-hyuck said, making it clear that the Blue House controlled the appointment.

On Monday, Lee said the team is reviewing when to question Woo, as suspicions were raised during its investigation into the Culture Ministry’s blacklisting of artists critical of the administration. During the course of the probe, investigators found that Woo may have meddled in the ministry’s appointments.

The team questioned five heads of bureaus and departments who were demoted in May and June last year. Chung Kwan-joo, former presidential secretary for public communications, was appointed as the first vice minister of culture in February last year and he ordered demotions of six officials in the subsequent month, a senior ministry official told the JoongAng Ilbo.

“Even [former Culture] Minister Kim Jong-deok said there were no justifications, but Vice Minister Chung said it was an order from the senior civil affairs secretary’s office,” he said. “He said the senior secretary confirmed it, so we should just do it rather than offend the higher authority.”

A couple months later, five out of the six on Chung’s list were demoted.

“In the ministry, six demotions controlled by then presidential chief of staff Kim Ki-choon in October 2014 is referred to as the first purge, and last year’s demotions were called the second purge,” the source said.

The independent counsel is also investigating whether Woo was behind Lee Seok-su’s resignation from his special inspector post and the subsequent dismantlement of the office. Investigators already questioned Lee and his assistant about the matter.

Lee, appointed in 2015 by President Park as the first independent inspector general to operate a new anticorruption system against top Blue House aides and the presidential family, resigned in 2016, after he faced a prosecution’s probe into an alleged leak of details in his investigation.

Before accepting Lee’s resignation, the Blue House launched attacks against him. It accused Lee of leaking information regarding his probe into Woo. Lee concluded that the prosecution would have to take over and question Woo on charges of embezzlement and abuse of power.

The prosecution briefly questioned Woo in November, but did not press any charges. The prosecutors were also fiercely criticized for going easy on him, as he was once a member of the prosecution.

The independent counsel then picked up the probe on Woo. Aside from tax evasion and embezzlement from a real estate company run by his family, Woo, as a civil affairs senior secretary, was accused of having turned a blind eye to Choi’s interference in state affairs.