Final versions of textbooks by the gov’t are released

Final versions of textbooks by the gov’t are released 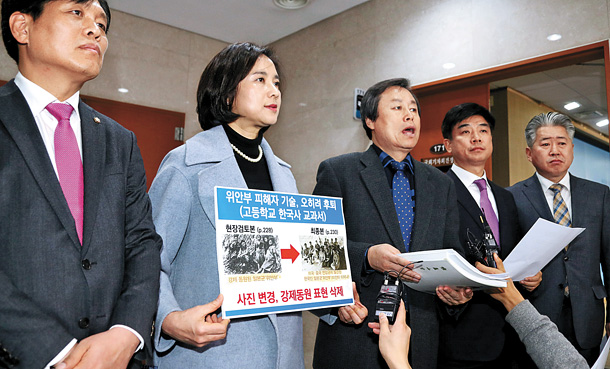 The Ministry of Education released Tuesday the final versions of controversial state-authored history textbooks for middle and high school students, which are supposed to go into use from 2018.

The ministry said it made some 760 edits to the textbooks after drafts were revealed to the public in November, using the feedback it received.

While the state-authored textbooks will call Aug. 15, 1948, Foundation Day of the Republic of Korea, the ministry said authorized private history textbooks can describe the date as the foundation date of the country or the government.

The ministry also said the new textbooks admit the delay in the government’s efforts to get the facts straight on Jeju Island’s April 3rd Uprising. It is generally understood that the details of the brutal atrocities committed against suspected leftists on the island in 1948 were hushed up by the government until after the democratization movement of the country in the late 1990s.

The previous drafts of the state-authored textbooks were also criticized for overly praising the work of former President Park Chung Hee. The initial draft of the high school textbook spent four pages describing the former president’s positive achievements, while allotting only half a page for the negatives that accompanied them.

The revised and final version of the high school textbook, the ministry said, admits that Park’s Saemaul (New Village) Movement “had its limits.” But the textbook will still allot nine pages to history related to former President Park.

“It was not easy to shorten the pages because there is a lot of information in general on the positive and negative attributes of former President Park,” the ministry said.

Further details of the history of the “comfort women,” or victims of Japan’s wartime sexual slavery in frontline brothels during World War II, have been added. The initial draft did not contain much information on the comfort women.

The final versions detail how the Peace Monument, a bronze sculpture of a young girl that symbolizes comfort women, was set up across from the Japanese Embassy in Seoul in 2011 with funds from the public.

The state-authored history textbooks, which were heatedly debated between liberals and conservatives, came in for additional criticism after President Park Geun-hye, daughter of former President Park Chung Hee, became embroiled in a corruption and power abuse scandal that led to her impeachment in December. The textbooks were an initiative of her administration.

Authorized private history textbooks are those produced privately but authorized by the Education Ministry.

“Revised or not, the state-authored history textbooks are still textbooks about Park Chung Hee created by Park Geun-hye,” said Chu Chin-oh, professor of history at Sangmyung University in central Seoul.

The Education Ministry intends to accept applications from middle and high schools that would like to volunteer as experimental schools to use the state-authored textbooks from this year and communicate with the ministry on how the textbooks are faring. But heads of education offices are not cooperating.

Some eight education offices including those of Seoul and Gyeonggi have refused to inform schools in their districts about the ministry’s program to select experimental schools.