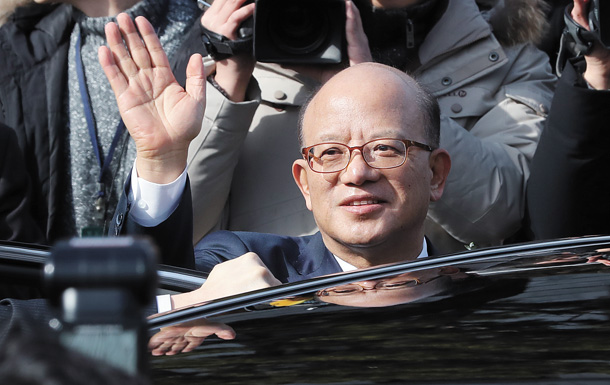 Korea’s criminal justice system is being challenged by judicial vacancies that are growing in the aftermath of the presidential impeachment.

Park Han-chul, chief justice of the Constitutional Court, ended his six-year tenure on Tuesday, and the court, currently holding the impeachment trial of President Park Geun-hye, is left with eight judges. Because the president has the power to nominate and appoint the chief justice of the court, the vacancy will likely remain for sometime.

Another justice of the court, Lee Jung-mi, will end her term on March 13 of this year. Selecting her successor will also be delayed, and the court will be operated with only seven judges.

The Supreme Court also delayed indefinitely its process of selecting a successor to Justice Lee Sang-hoon, whose tenure ends on Feb. 27. The court originally planned to make an announcement in December to receive recommendations, but canceled the plan.

A Supreme Court justice is selected by the chief justice of the Supreme Court from recommended candidates. The National Assembly must approve the choice and the president makes the appointment.

“It is the majority opinion in academia that the acting president’s appointment of a supreme court justice is against the Constitution,” said a Supreme Court source. “Because the National Assembly must approve the nominee, we will likely start the selection process after the impeachment is ruled on.”

Starting from Feb. 27, the remaining 12 justices on the bench will run the Supreme Court with a vacancy.

The Park administration is also operating without a minister of justice.

Following the prosecution’s conclusion in November that Park was a co-conspirator in a massive abuse of power scandal, Justice Minister Kim Hyun-woong expressed his intention to quit. Park accepted the resignation later that month but left the post vacant. The justice minister oversees the criminal justice system and other legal affairs of the administration. Park was impeached the next month.

As the crisis deepens with increasing vacancies, analysts said emergency measures must be sought to restore the rule of law. In the legal community and academia, the successor of Constitutional Court Justice Lee and a new justice minister must be appointed in order to minimize the vacuums.

The Constitutional Court has nine judges, which reflects Korea’s separation of powers. Three are selected by the president, three by the National Assembly and three by the Supreme Court chief justice. Because the chief justice of the court is selected by the president among the judges and appointed after the National Assembly’s approval, filling Justice Park’s vacancy is technically impossible while the impeachment trial is ongoing.

Lee’s successor, however, can be appointed because she was selected by the Supreme Court chief justice.

“We believe there is no legal problem in appointing her successor,” a senior Supreme Court official said. “But we do not want the implication that we are influencing the impeachment trial in any way. So, we are trying to find the appropriate timing.”

Hwang Do-su, professor of law at Konkuk University, said Prime Minister Hwang Kyo-ahn, the acting president, should appoint the justice minister. “In this case, he should consult with the National Assembly and make the appointment because the appointment is needed to maintain the status quo,” he said.

After Park was impeached, her presidential power was immediately suspended and Hwang became the acting president. Constitutional scholars largely believe that the acting president’s authority should remain at a minimum level to prevent paralysis of the government but not overreach.

Meanwhile, the outgoing chief justice of the Constitutional Court again urged the remaining judges to quickly rule on the impeachment of Park. “Taking into account the grave urgency of the situation that the president is suspended for nearly two months, the entire nation probably agrees that the court must make a judgment as soon as possible,” he said in a farewell speech. During the ninth hearing of the trial last Wednesday, the chief justice set a deadline of March 13.