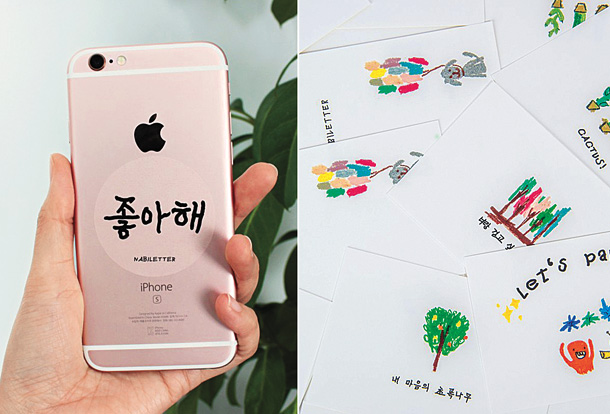 Stickers, left, and stationery, designed with handwriting from survivors of the Japanese military’s wartime sexual slavery, are sold by Nabiletter. [NABILETTER]

As Korea becomes a fierce battleground of ideologies, whether political, social or cultural, Koreans are expressing their ideas by spending money on everyday items such as shirts, phone cases, ribbons and beverages.

The most popular idea to adorn products is one concerning “comfort women,” a euphemism for the Korean victims who were forced into sexual slavery by the Japanese army during World War II.

Nabiletter (butterfly letter) is a digital font developing brand that started off as a crowd-funded project in August 2016, using the actual handwriting of surviving “comfort women” to develop and distribute fonts to be used on computers and smartphones.

The project collected 5.6 million won ($4,830) by Sept. 20, 2016, surpassing its initial target by 11 percent. The website currently allows people to download and use the fonts for free.

“With their handwriting, we wish to remember the pain of comfort women, which is over but never actually over,” said Kim Hyun-sun, president of Nabiletter. “We wish to record and remember their painful history.”

After downloading the fonts and applying it to their phones, people post the images of their phones with the fonts to show to others and share their support for these women. As of Jan. 24 there were 102 posts on Instagram with the hash-tag Nabiletter. The website also sells shirts and stickers with letter decorations in the various fonts.

Another brand that commemorates comfort women is Marymond, a design shop established in 2012. The shop in Seongsu-dong, eastern Seoul, carries a variety of fashion items from phone cases to bags, shirts and notebooks. The brand is known for its unique flower patterns on products, which were designed by the victims. Each flower in the pattern symbolizes the women who were taken by the Japanese army.

“My boyfriend bought me a phone case from Marymond. I like it because it was a pretty gift, and more so because I felt glad that he was sharing the same ideas as mine,” said Jung Hyun-jung, a 22-year-old university student who received the gift for Christmas.

A different kind of marketing is used by shop owners who make use of yellow ribbons to sell their products. Yellow ribbons commemorate the sinking of the Sewol ferry on April 16, 2014, in which 304 people died. The brands give out the ribbons for free in addition to their products to appeal to consumers who mourn the tragic accident.

Jan. 9 marked the 1,000th day after the Sewol ferry was lost three years ago, and the Sindorim branch of Juicy, a smoothie franchise in southwestern Seoul, gave out yellow Sewol ribbons to customers who bought their drinks on that day. Having bought the drinks, people posted pictures with the ribbon they received on social media platforms such as Twitter.

Aladin, a second-hand bookstore franchise, gave out free copies of the book “Come back home on Friday,” which records the 240 days of the victims’ families following the tragic event, from Jan. 9 through Jan. 15. Aladin has also been giving out Sewol ferry key rings for free to customers who buy books about the incident.

While those who support comfort women and the Sewol ferry issues are not often criticized, or at least not openly, some ideas arouse anger. One example is a T-shirt that read, “Girls do not need a prince,” sold by Megalia, an online radical feminist group that has become infamous for the sexism of some of its members.

In August 2016, a gaming company named Nexon ended up firing one of its voice actresses, Kim Ja-yeon, for buying the T-shirt when it received numerous complaints from male users. Later, the company was even more harshly criticized by members of the feminist group. Despite heavy criticism, the T-shirts made more than 134 million won in one month.

Another case involved “impeachment soju” and “resignation beer,” which were sold in Gwangju, South Jeolla, from Dec. 2016, to early January. Garden Liquor, a liquor wholesale company in Gwangju, sold soju and beer with stickers that read ‘impeachment soju’ and ‘resignation beer’ to celebrate the impeachment of President Park Geun-hye, but had to stop sales on Jan. 12 because it was flooded with too many complaint from Park supporters.

Within one month, the wholesale company sold some 6 million bottles of soju and beer within the city of Gwangju.

“The rising popularity of these ideological products actually comes from how modern people have come to live a life further away from meaning and ideas,” said Rhee Suk-koo, an English literature professor at Yonsei University who specializes in postmodern literature. “As an individual’s power becomes weaker compared to the power of the state, atomized individuals seek for a way to make a statement with the little power they do have.”

Rhee added, “For those who live without meaning, the items work as a means to build a meaningful self-image, with which they establish solidarity with others. So in a way, they are helping themselves.”

Crowd-funding is a method used by new and small businesses that readily takes advantage of the phenomena, as was the case for Nabiletter. Businesses come up with ideas that not only satisfy consumers’ needs but also their sentiments, as well.

The small-sized decorations, which come in 10, 20 and 30 centimeter (3.9, 7.9 and 11.8 inch) sizes, are replicas of the two comfort women statues currently installed; one near the Japanese Consulate in Busan and one in front of the Japanese Embassy in central Seoul.

Other ongoing projects of the website include bags printed with Sewol ribbons, T-shirts supporting gay rights, movies about feminism and badges asking for the president’s resignation.

“It is important,” reads the website, “Tumblbug is not a platform for simply appealing to the emotions and collecting donations, but a funding platform that is run by the law of the market. The goal is to secure a minimum demand for the project.”

Whether the intentions be selfless or self-oriented, ideology increasingly affects younger people’s consumption patterns, as explained by Rhee. “People need a sense of belonging, and buying such items provides such connection to those who share the same ideas.

“Although it’s not a long or continuous form of commitment, it’s a part of forming one’s inter-relational image.”