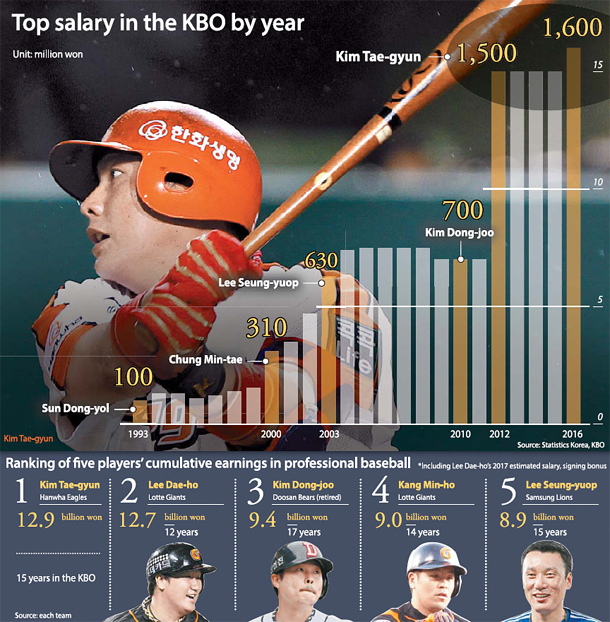 With the rise in the Korea Baseball Organization’s (KBO) popularity, the value of star athletes continues to climb. The Lotte Giants signed 35-year-old Lee Dae-ho on a four year contract of 15 billion won ($12.9 million) on Tuesday. Professional baseball has now become a commercial force to be reckoned with and the KBO league has transformed into a sprawling industry.

The JoongAng Ilbo, an affiliate of Korea JoongAng Daily, analyzed the data from the start of pro baseball in 1982 to 2017 and Kim Tae-gyun was ranked as having the highest cumulative earnings in the KBO league. Excepting 2010-2011, when Kim played in Japan, starting from his debut in 2001 to the present, he earned an average of 12.9 billion won for 15 years in the KBO league.

Up until last year, he earned 11.3 billion won from the KBO league. According to these numbers, playing 1,653 games in his career, Kim Tae-gyun was paid 6.8 million won per game or 6.2 million won for each of his 1,828 hits.

The runner-up for highest cumulative earnings is Kim Tae-gyun’s frenemy, Lee Dae-ho. Including this year’s signing bonus, Lee’s total revenue from the KBO league is estimated at 12.7 billion won. If one factors Lee’s five-year sojourn in Japan and America, his earnings skyrocket to 30 billion won.

Third at bat is Kim Dang-joo of the Doosan Bears with 9.4 billion won, then Kang Min-ho of Lotte with 9 billion won and Lee Seung-yuop of Samsung with 8.9 billion won. Lee Seung-yup played in Japan for eight years starting in 2004 and earned an additional 3.8 billion yen (38 billion won).

In contrast, the highest earners in 1982 were Park Chul-soon, OB and Baek In-chun, MBC at 24 million won. Up until the 90s, there was a rate of increase salary cap of 25 percent preventing largess. The “national treasure pitcher” Sun Dong-yeol, 54, debuted in 1985 and brought in 1 billion won over 11 years.

With the institution of the free agent system in 2000, player salaries started to inflate. After Korean stars advancing to America and Japan became a regular phenomenon, the salary gap between players started to widen. There are 23 players in the KBO league with earnings above 7 billion won.

Downward inelasticity due to the talent and commercial viability of stars meant their earnings did not easily drop and Lee Dae-ho’s contract may continue to escalate. In three to four years, there will be at least 10 players with earnings above 10 billion won.

According to the Survey on the Average Company, issued by the Small and Medium Business Administration (SMBA) in 2013, the sales of an average company are 1.5 billion won. When considering the earnings of pro baseball players as businesses, there is a net profit. A player earning 10 billion won would be comparable to a business with sales figures of 100 billion won.

The pro baseball players already commercialized are maintaining their own value by utilizing a myriad of resources to generate revenue. After the conclusion of the current season, the KBO league will introduce the agent system.

Players will receive systematic management from agents and will be able to focus on just the baseball. Currently, there is a minority of players who use agents to facilitate scheduling, filming ads and employing trainers for overseas training.

With the rise of Korean players’ earnings, salaries of foreign players within Korea are also catapulting. Dustin Nippert, 36, Doosan, recorded the highest salary this year of 2.4 billion won. Of the 27 foreign players contracted in the past and present, 44 percent (12 people) claimed a salary of 1.2 billion won. As personnel expenses become larger, the KBO league ball teams will diversify plans in cultivating marketing, sales and service organizations.

Preparations are being arranged in structuring business structure for vigorous investment in areas such as, injury management, insurance and training. “The increase of pro baseball player earnings is evidence of the market’s expansion,” said Lee Young-hoon, Sogang University economics professor. “Possessing self-perpetuation, the KBO league is going forward as a genuinely professional sport.”