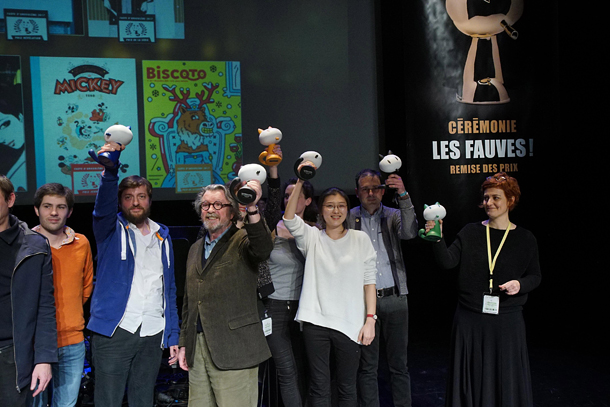 Korea Manhwa Contents Agency announced on Sunday that Choe’s comic book received the Prix Revelation at the 44th Angouleme International Comics Festival, which is one of the most renowned comics awards events in the world.

The award is given to recognize the excellence of an up-and-coming cartoonist who has published less than three comic books in French.

Choe, who goes by the pen name Ancco, said, “I have long believed that I’m a weirdo that has lived a lonely life in Korea, but I’m now standing here [to nab the award] thanks to comics. I also want to express special gratitude to Kim Dae-jung, CEO of Sai Comics who introduced me Angouleme, and to God, who helped me complete my work.”

“Prix Revelation is a very prestigious award that could help the winner receive a great amount of attention from all over Europe,” according to Jean-Louis Gauthey, an official from Cornelius, which published the French version of the book.

Though “Bad Friend” was nominated for the top prize, the Golden Wildcat, as well, it failed to capture the award.

Meanwhile, Choe’s comic book, which was published in Korea in 2012, has been acclaimed for creatively portraying the darkness and struggles of adolescence and emerging adulthood. It is an autobiographical book revolving around two runaway teenagers.

The book was published in France last year with the French title “Mauvaises Filles,” and was invited to the Paris International Book Fair. In March, Choe’s work caught a lot of attention while being exhibited at the Belgian Comic Strip Center in Brussels.

The cartoonist made her debut in 2003 with “Ancco’s Picture Diary,” an online cartoon series.