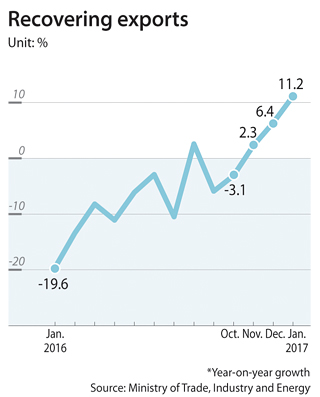 Exports in January rose 11.2 percent from the same month last year, marking the highest growth in four years as shipments of semiconductors and petrochemicals improved, the Ministry of Trade, Industry and Energy said Wednesday.

The amount of goods shipped out of Korea last month totaled $40.3 billion. January marked the third straight month of export growth and the first time in over two years that exports expanded three months in a row.

“Exports rose by more than 10 percent for the first time in four years, and I think the country’s exports have finally recovered to a certain degree,” said Joo Hyung-hwan, Minister of Trade, Industry and Energy.

“Exports of semiconductors have been increasing for a fourth straight month,” said Lee Min-woo, a director at the Trade Ministry, “largely because prices of memory products have risen and more smartphones use larger-size memory chips.” The price of a 1-gigabyte dynamic random-access memory chip rose nearly 28 percent from $2.34 in October to $2.99 last month.

During the same period, petrochemical exports jumped 34.9 percent, their biggest growth since December 2014. “Prices of petroleum and petrochemical products have gone up, and local companies’ manufacturing capabilities have improved as they’ve started to operate more factories compared to the past,” said Lee at the ministry.

OLED displays, steel and computer products were other key exports that saw improvements in January. Ships, wireless telecommunications and automobile exports, on the other hand, had less than stellar performances.

“Wireless telecommunications remains weak due to the impact from the discontinuation of Samsung Electronics’ Galaxy Note7,” Lee said, “and the automobile sector saw overseas sales drop because January had fewer business days due to the Lunar New Year holiday. Local automakers also have not released as many new models recently.”

Exports to Vietnam, with which Korea recently signed a free trade agreement, rose the most, by 40.7 percent, followed by India with 27.1 percent.

“Exports to Vietnam rose for a 12th straight month, and the data showed more semiconductors and machinery products were exported to the local companies operating manufacturing plants in Vietnam,” Lee said.

There are concerns among Korean exporters about a strengthening won. U.S. President Donald Trump recently criticized China and Japan for being currency manipulators, sending the value of Japan’s yen and Korea’s won up. A stronger Korean currency would have a negative impact on Korean exporters.

Kim Yoo-mee, an analyst at Kiwoom Securities, believes the weak dollar will only last for a short period of time and could strengthen later this year. “Korea’s won still has room to weaken further without having any negative impacts on exports,” Kim said. “If the currency trades above 1,100 won against the dollar, I think the country’s export figures won’t be affected too much since the prices of major export products have been rising anyway.”

Korea’s won strengthened 0.3 percent to close at 1,158.10 against the dollar on Wednesday.