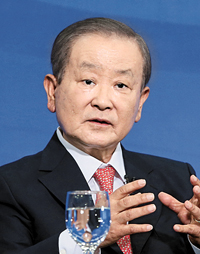 Kang Bong-kyun, most known for steering Korea during its most challenging years in the late 1990s, passed away on Tuesday from pancreatic cancer. He was 74.

Kang, who served as finance minister during the Kim Dae-jung administration, was a longtime public servant who helped map out a five-year economic plan under President Park Chung Hee.

Although he served as minister of information and communication during Kim Young-sam’s administration, Kang took on the role of the Blue House senior secretary of economics and was on the government’s economy restructuring team in 1998 when the economy was hit hard by the shortage of foreign reserves amid huge foreign debts that led the Korean government to seek out an unprecedented loan from the International Monetary Fund.

The Blue House position was actually a demotion as it was a deputy-minister level post. Yet Kang embraced the role saying “What if it’s a minister-level or a deputy-minister post? What’s important is the job.”

The following year he was promoted to the country’s finance minister and led restructuring not only in the financial market but also in Korea’s leading conglomerates, including Daewoo Group. He’s also famous for planning the economic policies for then- presidential candidate Roh Moo-hyun, who won the 2002 election.

Born in Gunsan, North Jeolla in 1943, Kang taught elementary school for three years before attending Seoul National University. While in school he passed the national public servant exam. He worked for the government until he took an interest in politics. In 2000 Kang ran for a seat at the National Assembly as a member of the Millennium Democratic Party but lost. His opportunity came in 2002 when he won a by-election and served two more terms.

In recent years Kang had taken a more conservative stance as he served as the co-head of the Saenuri Party’s election campaign committee in April.

He stirred up controversy when he proposed the idea of Korea’s own quantitative easing to lessen the impact caused by corporate restructuring and didn’t hesitate to lash out against Kim Chong-in, the temporary lead of the Minjoo Party, over economic issues.

Kang was diagnosed with cancer three years ago. He is survived by his wife and two children.

Kang will be buried at his family burial ground in his hometown of Gunsan today.