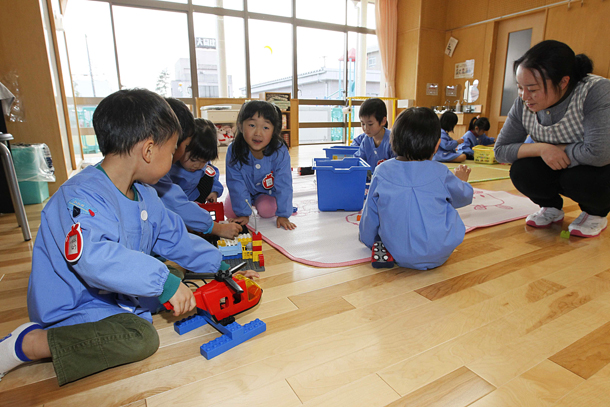 Lately, a company garnered special attention from Japanese women. It’s a software developing company named Works Application. The global consulting company Great Place to Work (GPTW) named it the third best in Japan’s ranking last year. After Microsoft Japan and American Express, it got high marks among companies with more than 1,000 employees. The ranking reflects the trust of the employees in the management.

Founded in 1996, Works has 5,631 employees, and about half are women. Due to the characteristics of the IT company, the average age range of its workers is 25-29. Structurally, the company can only grow when it offers a suitable environment for female workers. A system that accommodated a work-life balance was therefore needed. CEO Masayuki Makino proposed on-site day cares.

A month and a half ago, a day care facility titled Withkids opened on the 20th floor of the Works headquarters in Akasaka, Tokyo. Ayaka Morofuji, 29, works at the development department and brings her two-year-old son to the facility. On her breaks, she comes to the 20th floor to see her child. She has lunch with her son, and sometimes dinner if she has to work late. “When I dropped him off at a day care near home, I had to pick him up at 5 p.m. It’s dreamy now.”

The daycare operates from 8 a.m. to 8:30 p.m., and a dietitian provides nutritious meals. It also offers food for parents and has on-site nurses.

The door is open to other family members, as well. Grandparents come to check on the kids and get to learn more about the environment where their daughters and daughters-in-law work. It costs 30,000 yen ($265) per month, far less than the non-government-subsidized day cares that cost 50,000 to 100,000 yen. The monthly fee includes lunch, dinner, formula and diapers.

One challenge is bringing a young child to the office in downtown Tokyo during rush hour on subways and bosses, so the company introduced flexible work hours so employees could avoid rush hour and choose the shift they prefer. They may choose to work in the morning and play with their kids in the afternoon. The staff at the day care are employed as contractors, but the company offers wages and benefits on par with the regular employees so that they can work with a sense of responsibility.

When the project began in March 2016, some 50 employees worked together to create a facility that they would be willing to use. Unlike other day care centers that have an enrollment period once a year in April, employees can sign up anytime so they don’t have to reconsider or avoid coming back to work.

The program is certainly costly for the company. But Works CEO Makino says, “I want to prevent good employees from quitting because of marriage and childcare. It is an investment in talent.” After all, stable families make a company stronger.