Duty-free landmark at risk of bankruptcy

Duty-free landmark at risk of bankruptcy 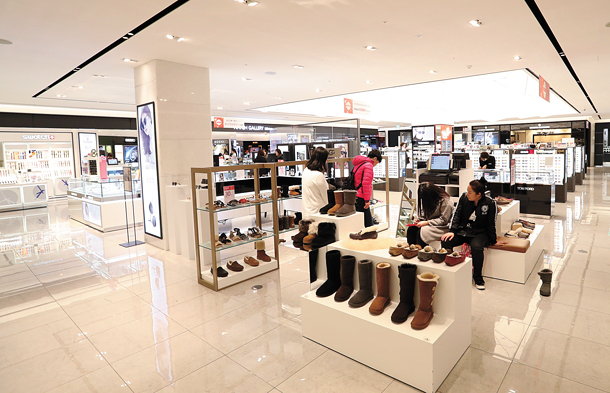 On Tuesday, the local duty-free industry was shocked by news that Dongwha Duty Free, Seoul’s oldest duty-free store, was attempting to sell its management rights.

If the store fails to find a new owner, it will have to return its operation license and liquidate. It would mean the end of a legacy store that has been in its central Seoul location since 1973, and some in the industry fear it portends the downfall of Korea’s overall duty-free industry.

Dongwha Duty Free’s financial troubles began in 2013 after its parent company, Lotte Tour, suffered a huge loss from a failed development project in Yongsan District, central Seoul. To save itself from the brink of bankruptcy, Lotte Tour sold 19.9 percent of its 61.56 percent share in Dongwha Duty Free to Hotel Shilla with a put option where Hotel Shilla could sell back its shares after three years and collect on the investment.

Hotel Shilla, though, doesn’t seem too thrilled about taking over the operation, saying it wants to retrieve its investment first. If Dongwha Duty Free can’t find a new owner, it might have to liquidate.

Lotte Tour denied speculation of Dongwha Duty Free closing down. “The business environment for duty-free isn’t at its best at the moment,” a source at the company said, “so in the meantime, we want to shift focus to our original business [resort management].”

“We’re still talking with Hotel Shilla, and regardless of who gets to run Dongwha in the end, the operation will not close down,” the source said. 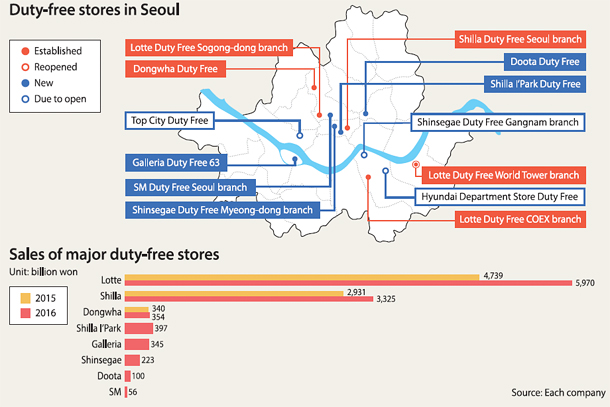 Although the primary reasons for Dongwha Duty Free’s crisis were financial difficulties and management failure, some place partial blame on fundamental problems in Korea’s duty-free industry. Over 70 percent of revenue comes from Chinese tourists, making retailers overly dependent on visitors from one country and promoting cutthroat competition. For instance, commission fees given to tour guides that bring Chinese groups to stores jumped from 10 percent to as high as 30 percent.

The rising number of duty-free operators has been fueled by government policy encouraging competition. In the past, business rights to operate duty-free locations lasted 10 years and were extended if companies met certain requirements. In 2013, the law was revised to issue licenses through an open bid every five years.

This raised the stakes for retailers because the bids became not just a business issue but also a fight for pride and brand image. The frequency of the bids also intensified competition as more licenses were granted. Between 2015 and this year, the number of duty-free shops in Seoul has more than doubled from six to 13.

As more players enter the field, the gap between the best-performing and worst-performing operators has widened. Last year, the market size of duty-free shops posted a 33.5 percent increase year on year to 12.2 trillion won. Industry leaders Lotte and Hotel Shilla raked in 30 percent more than the previous year, with 5.9 trillion and 3.3 trillion won each.

On the other end, five new operators saw losses of several billion won. The market became more polarized after Chinese tourism slowed last year, ostensibly because of tense relations between China and Korea over regional security issues. Chinese visitors to Korea recorded a steep fall during 2016’s second half from 935,000 in July to 531,000 in November.

The timing of the decrease corresponds with a decision by Korea’s government to deploy a U.S. missile defense system known as Thaad that has drawn the ire of China. The tourism figures recovered slightly in December to 548,000.

“Tourists to Korea reached an all-time high last year, but the figures dropped after breakout of the Thaad issue,” the Global Times, a state-owned Chinese newspaper, said Tuesday. “If Korea is to push through plans with its deployment in the future, its tourism industry will inevitably weaken even more.”

The Chinese government has taken several measures to reduce tourism to Korea. Last month, it rejected applications for eight chartered flights to the country, and most recently, a number of cruise ships scheduled to stop in Korea have changed their destination to Japan.

Many industry analysts argue the fundamental problem is Korea’s overdependence on Chinese tourists. “The market needs to be more diverse with more tourists from other countries,” said Kim Chul-won, a professor of leisure and tourism at Kyung Hee University.