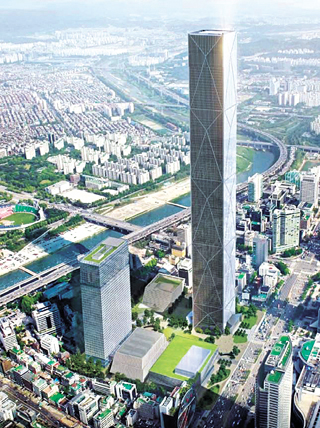 The automaker said construction will be completed by 2021.

What’s expected to be an auto theme park dubbed the Global Business Center will be 569 meters (1,866 feet) tall, which is 14 meters higher than the Lotte World Tower, according to a draft of an environment impact assessment Hyundai Motor Group submitted to the Gangnam District Office.

Hyundai Motor, Korea’s leading and the world’s No. 5 automaker, has been discussing how to make a statement with its headquarters in Samseong-dong, southern Seoul with the city government and Gangnam District Office, since it purchased a 79,342-square-meter parcel of land from Korea Electric Power Corp for 10.55 trillion won ($9.13 billion) in 2014.

The Gangnam District Office said Wednesday it will unveil the environment impact assessment, which includes the environmental influence the new building will have on the district to the nearby residents and related business entities, and hold briefing sessions starting today. The office will receive public opinions until March 3 and negotiate with Hyundai Motor.

GBC, which Hyundai Motor pledged to make into a nationwide landmark in 2015, will be a 105-story building with 926,162 square meters of floor space. It will consist of not only company offices but also cultural and tourism facilities. It will include a 553-meter observatory, a luxury hotel, exhibition hall, underground plaza, convention center and performance hall with 2,000 seats.

The local government said the demolition of the Kepco building was finished last month and the new substation for GBC will be built no later than March.

“The construction of Hyundai Motor Group’s GBC signals the district’s leap towards being a global economic center, together with World Trade Center just across the Yeongdong-daero,” said Gangnam Mayor Shin Yeon-hee.