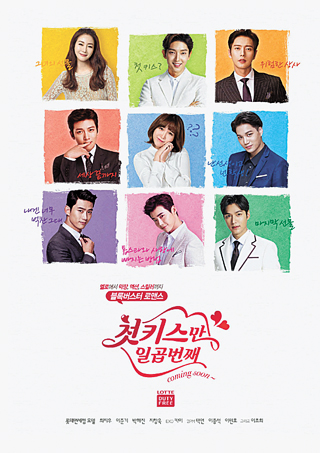 From big conglomerates like Samsung and Lotte to the smallest mom-and-pop manufacturers, companies of all sizes are producing their own web dramas to promote their products and build up brand recognition.

Web dramas are shorter than their television counterparts and typically distributed through online video platforms like YouTube. They have become a popular format because they are less costly and easier to produce than conventional television dramas.

Lotte Duty Free produced its own web drama, “Seven First Kisses,” starring popular Korean celebrities like actors Lee Min-ho and Lee Jong-suk, Kai of the boy group Exo, and rapper Taecyeon, all of whom are also models for the retailer. The drama centers on a female protagonist who works as a clerk at Lotte Duty Free’s information desk and shows the company’s products and services in each episode.

“Web dramas are an efficient medium for us to more explicitly show our services and products at a relatively low budget,” a Lotte Duty Free spokesperson said. The company spent 3.8 billion won ($3.3 million) producing the drama, far less than conventional TV dramas that could cost 20 billion to 50 billion won per series. 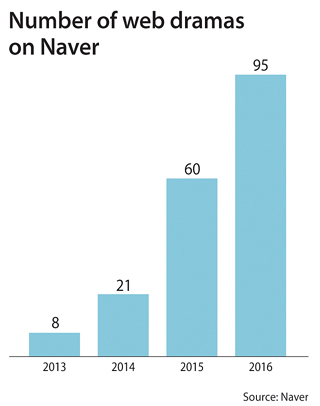 “Although we cannot measure if the content directly resulted in a sales increase, the drama evidently improved recognition of our brand,” the spokesperson said.

“Seven First Kisses” surpassed 100 million views just 50 days after its release on Nov. 25. It has been streamed on various web platforms including Naver’s TV Cast, YouTube and Facebook. It’s the first time a web drama produced by a company for marketing purposes has exceeded 100 million views.

The drama has even done well in China, where tense relations with Korea over regional security issues have apparently led the Chinese government to freeze Korean entertainment imports. On China’s flagship media distribution platform Youku and social networking service Weibo, the drama has recorded over 50 million views. The drama was even selected by Youku users as one of the hottest web dramas in 2016 last month.

“The success of this web drama was a chance for us to discover new possibilities for Korea’s cultural content,” said Kim Bo-joon, managing director of marketing at Lotte Duty Free. The company plans to make a follow-up web series, though a detailed schedule has yet to be decided.

Samsung Electronics was an earlier adopter of web dramas as a marketing tool, with a series in 2013. Its latest production, “Be Positive,” was released on Oct. 31 last year and stars Do Kyung-soo, also known as D.O. of boy band Exo, as the main character. The drama doesn’t explicitly promote Samsung, but the company’s affiliated fashion brand and social contribution activities have been featured in parts of the series. The drama surpassed 20 million views just 11 days after release and reached over 40 million views after a month.

“To expose products manufactured by Korean SMEs, we received applications from over 100 companies and selected about 40 with items that go naturally with the written scenario,” a spokesman from the Small & Medium Business Corporation said. “From hat hangers, cosmetics and snacks to vacuum cleaners, we tried to give SMEs’ products exposure to the public through product placement, and we are getting positive feedback.”

The popularity of web dramas has led to a striking increase in the amount of content produced every year. According to Naver, operator of the nation’s most popular search engine, the number of web dramas distributed through its platform went from just eight in 2013 to 95 last year.

And while the content in the past has mostly been viewed by young women in their teens, there is growing content for men and consumers in other age groups. According to Naver, 40 percent of web drama viewers last year were men, and the greatest demand came from people in their 20s, followed by those in their 30s, offering companies great potential for marketing.

“Considering the popularity of the content, we plan to inject 1.1 billion won every year for three years to support web drama and web video producers and enhance our platform for better content distribution,” a Naver spokesperson said.