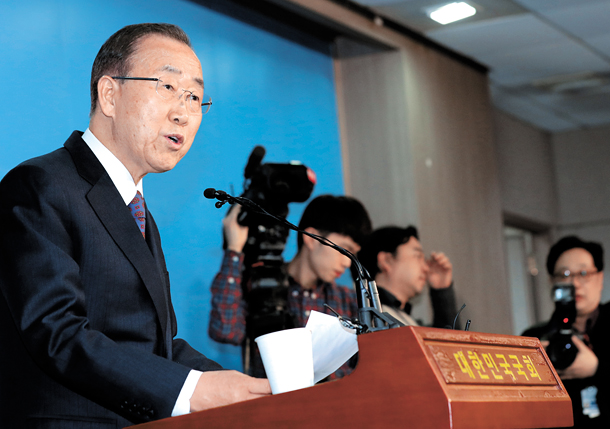 Former UN Secretary General Ban Ki-moon announces he will not run for president at the National Assembly in Yeouido, western Seoul, on Wednesday. [YONHAP]

Former UN Secretary General Ban Ki-moon dropped his presidential bid Wednesday, capping an end to his three-week journey to the Blue House as he has found himself facing myriad controversies and questions over his political skills and qualifications.

Standing before reporters during a hastily arranged press briefing at the National Assembly around 3:30 p.m., the former UN chief announced he would stop seeking to capture the country’s highest elected office while acknowledging that he had wanted to lead the nation as it is mired in a crisis with President Park Geun-hye now impeached.

“I told the people my intention was to bring about national unity because the country was deeply divided,” said the 72-year-old, adding he had wanted to capitalize on his 10-year career as the UN chief to help the country by throwing himself into politics.

Then Ban blamed the political establishment for his decision to drop out of the race, saying, “I have found political players very selfish, whose mind-sets are stuck in the past. I have come to the conclusion that it is meaningless for me to continue my path with them. Reflecting on this judgment, I decided to rescind my decision to take a lead in reforming politics and accomplishing national unity.”

Ban used harsh words in denouncing the political establishment and press for having washed his political aspirations away, going so far as to liken critical reports of his domestic activity over the past three weeks to character assassination.

“My sincere patriotism has been tainted by fake news and rumors that are akin to an act of murder of my character, leaving a scar on the UN for which I devoted 10 years as its chief and disappointing many people.”

Ban’s decision to walk away from the presidential race comes in stark contrast to his confident manner when he returned home from New York on Jan. 12 when he said he had the know-how on how to make a nation prosperous or failed because of the lessons he had learned at the UN.

While Ban blamed the harsh nature of politics, there has been rising speculation that the cause was largely due to declining approval rating, despite his national promotion tour.

In most polls, the lifelong diplomat remained a distant second with a two-digit approval gap between himself and frontrunner Moon Jae-in of the Democratic Party (DP).

In the latest survey, conducted by the JoongAng Ilbo on Tuesday and Wednesday on this year’s presidential election, Ban ranked a distant second with 15.7 percent of support, displaying a whopping 18.6 percent gap with frontrunner Moon Jae-in of the Democratic Party, who led with 34.3 percent.

While the former diplomat maintained second place, he was placed in a precarious position as his approval rating showed no sign of bouncing back despite his active promotion tour.

In the same poll, acting President Hwang Kyo-ahn soared to third with 10.3 percent approval, furthering speculation he would join the race on behalf of diehard conservative voters. South Chungcheong Governor An Hee-jung followed with 10 percent, trailed by Seongnam Mayor Lee Jae-myung with 9.8 percent. The poll was conducted of 1,000 adults nationwide.

Since his homecoming on Jan. 12, Ban visited every corner of the country, touting his credentials as a potential head of state intent on maximizing his experiences in the diplomatic world.

He at one point boasted that he could revive the country’s failing shipbuilding industry by persuading foreign heads of state to give orders to Korean ship makers. But Ban’s failure to present concrete policies and a new vision for the country proved problematic, shrinking his number of supporters.

While there had been rising speculation that the former diplomat of 40 years might opt to give up on his bid, his announcement was delivered abruptly, leaving most of his campaign aides dumbfounded.

Park Jin, former Saenuri lawmaker who has been helping Ban’s campaign, expressed his eagerness to help Ban win the race just hours before Ban’s announcement. Ban told his campaign staff to set up a press conference as he entered an office of the Justice Party to meet its chairwoman Sim Sang-jeung at the National Assembly at 3 p.m., just half an hour before.

The Democratic Party, most alarmed by Ban’s potential challenge in the race, said Ban’s announcement was in accordance with the people’s desire for change. “While it is an unexpected decision, we respect his call, which has reaffirmed the public’s desire for change in this election,” said Rep. Youn Kwan-suk, a party spokesman.

Moon said he would seek Ban’s advice on foreign affairs if he is elected president upon hearing the news.

“Some portion of conservative voters could mobilize around Prime Minister Hwang,” said Park, adding, “And yet, it will not lead to his victory to succeed the Park government under any circumstances.”

The veteran lawmaker proclaimed this year’s race will be between the DP and his party.