Koreans rush to get rodent bile

Koreans rush to get rodent bile 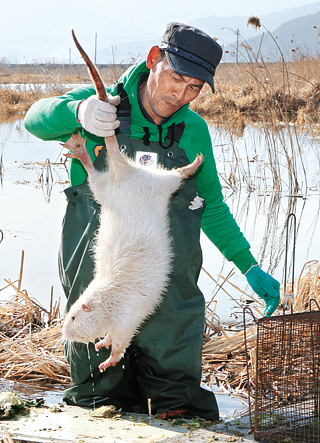 Tuesday was no ordinary day for the Nakdong River Basin Environmental Office. Its telephone line was jammed with over 100 callers all eagerly asking the same question: how do I trap a nutria?

“It was to the point where we couldn’t get any other work done,” explained Jeon Hong-won, an official on the office’s Nutria Extermination Team. “Throughout the day, people were asking me how to trap the animal and whether their bile was up for sale.”

They had every reason.

In a joint study by Gyeongsang National University in Jinju, South Gyeongsang, and the Nakdong River Basin Environmental Office, the rodent’s bile was recently found to have a higher percentage of ursodeoxycholic acid (UDCA) than that of a bear’s, prompting what now seems to be a rush to get ahold of the species.

What many seem to have overlooked, however, was that the substance is nowhere near being edible.

Prof. Yeon Seong-chan of Gyeongsang National University, who participated in the research, warned that consuming a nutria’s bile can cause serious parasitic infections.

The Korean government encourages nutria hunting with a 20,000 won (about $17) bounty for each catch, but said it would strictly prohibit nutria farming due to such health concerns. Anyone who violates the law prohibiting the trade, storage or breeding of nutria is subject to a maximum fine of 20 million won.

The national nutria control program is aimed at alleviating the damage they cause to wetlands.

According to descriptions from the Washington Department of Fish & Wildlife, nutria rodents are semi-aquatic, native to southern parts of South America and three times the size of muskrats. Adult nutria are about 24 inches long from nose to tail, with the tail itself being 12 to 16 inches long.

Rodents such as nutria, rabbits, hares, voles, muskrats and beavers are some of the species that can be infected with the bacterial disease tularemia. Tularemia may be transmitted to humans if they drink contaminated water, eat undercooked, infected meat, or allow an open cut to come into contact with an infected animal.