There are too many things to know when swinging. Some people like to take every little part of the swing and go over them in detail, but I like to keep everything simple. It’s only the matter of ball position; mechanism of your swing with your driver to your wedge should be the same.

One thing I found very interesting when playing with amateur golfers was that they all have different golf swings. Due to different physical conditions, they all had different swing problems.

Having too many swing thoughts may get you in bigger trouble. It’s best to check few important things and just swing the club.

Majority of amateur golfers tend to use their wrist too much. Some professional golfers use their wrist first in the backswing for what it’s called, “early cocking.” Early cocking is the wrist hinging motion in the beginning of your backswing to make your club parallel to the ground and your stance. After, they use the rotation of the shoulder to take the club to the top. I once used to do this, but now, I try to use my shoulder more in my backswing. Also, amateur golfers tend to take their club either too much inside or outside of the swing path. Sometimes, they have no shoulder rotations in the backswing as they rush to take the club up to the top. In this case, it makes it harder to produce power at the top to make strong impact since their upper and lower body is in two separate motions. 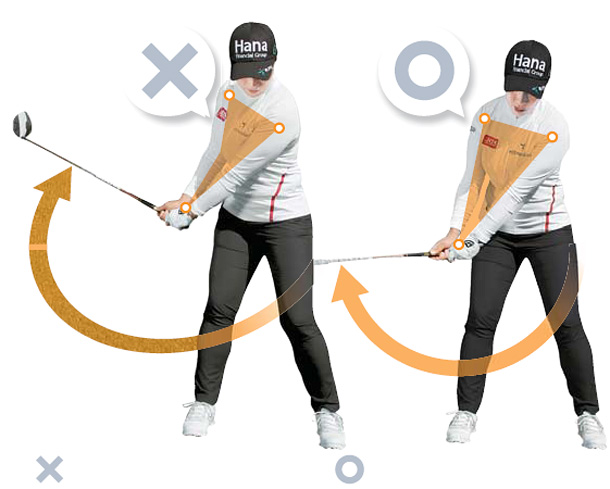 Triangle twisted when viewed from the front. If the club is taken back inside, it is difficult to make a strong impact. Triangle formed at setup with your wrist and shoulders. Start your backswing with the rotation of the shoulder. [HANA FINANCIAL GROUP] 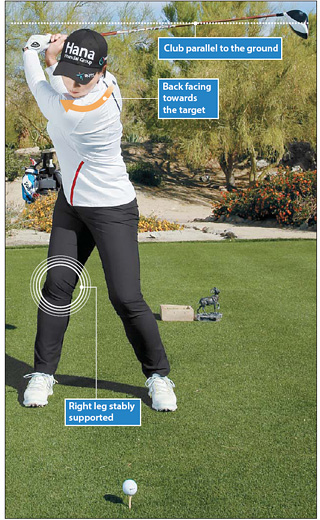 There are two things I emphasize in the backswing. First is the triangle formed at setup with your hand at one point and your shoulders at the other two. This triangle must be kept in this form until the early stage in the backswing to produce bigger rotation and swing arc.

When I address to the ball, I start my backswing by slightly lifting my club and push my left shoulder.

Another factor is the direction of my back at the top of the swing. You need to have enough upper body rotation; your back is facing towards the target. At the backswing, your right leg should be the same as your address. Right knee must be stably supported to be able to produce maximum strength at downswing.

Backswing is created in one connected motion; the more you think about it, the harder it gets. When swinging, it is the best to let go of your thoughts and swing the club. To do this, I strongly recommend readers to make image swings in front of a mirror to see their swing.