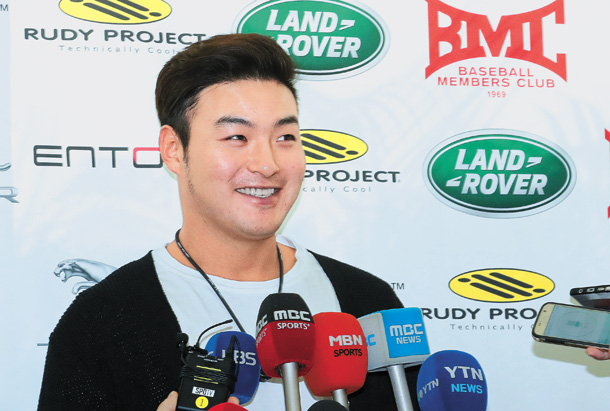 Park Byung-ho, a Korean slugger for MLB’s Minnesota Twins, talks to the reporters on Thursday at Incheon International Airport before departing to the United States to prepare for the upcoming spring camp. [YONHAP]

After a disappointing rookie season at the Major League Baseball (MLB), Korean slugger Park Byung-ho of the Minnesota Twins is set to spend his second season being more productive. Going into the spring camp soon, he will go into the new season armed with a new batting form.

“This year will be clearly more difficult than last year, but I’ve been working hard because I knew what went wrong last year and knew what I had to do to fix it,” Park told reporters at Incheon International Airport before departing for Florida on Thursday to join the team for the spring training later this month.

Other than rehabilitation for his injury, another important thing on his agenda during this offseason was changing his batting form.

Park made his professional debut in the KBO after picked up by the LG Twins in the first round of the rookie draft in 2005. His heyday in the domestic league came after he was traded to the Heroes in 2012.

Leading the league in slugging percentage during his first year with the Heroes, he went on to become the most valuable player in the league in 2012 and again in 2013. Park especially had a brilliant stint on the plate in 2013 when he belted out 37 home runs while tallying 117 runs batted in and 91 runs.

After peaking out in 2015 when he cranked a career-high 53 homers, Park signed a four-year contract with the MLB’s Twins worth $12 million, including incentives and an option to extend the contract one more year.

Despite his outstanding performance at the KBO, Park batted a meager .191 with 12 home runs and 24 RBIs in just 62 games, a stark contrast to the past when he was struck out only 0.23 times on average from 2011 to 2015. Park was especially vulnerable to MLB fastballs. Against pitches that traveled at 95 miles per hour or higher, his batting average stood at 0.050, or 1-for-20.

“Pitches [by the MLB pitchers] are a lot faster compared to the KBO pitchers,” Park said.

After spending a rough first year, Park decided to make some changes on his swing since September last year when he finished his season early due to an injury to his right middle finger. Although he heard about the need for a change in his swing form through his friends and teammates, it wasn’t easy with the injury to recover from.

But now, Park is more confident than before that he is prepared to take on the Major League pitchers. For one thing, he’s made his swing more concise. “I’ve been trying to get the timing right,” Park said. “I don’t think it’s possible to spot the difference with naked eyes.”

Still, concise form doesn’t mean he’s lost his power. One of the most notable moments of Park’s first year in the MLB came on April 16 last year when he blasted a dinger that traveled 466 yards in true distance. Out of the 12 homers he had that season, eight of them traveled more than 400 yards, an impressive figure that demonstrates his power behind the plate. Park is confident that even with the changes, he can still blast one beyond the fence.

With the spring camp and exhibition games coming up soon, he will be able to sort out his form before the opening.

Park will be clearing up his swing through the spring camp and the practice games.

“I’ll have to go all-out right from spring training,” Park was quoted as saying by the Yonhap News Agency. “I guess I had an excuse to make last year with my injury, but I’m not feeling any pain right now.”

“I need to forget about bad games quickly and get ready for the next day,” he added. “Last year, I kept thinking too long and hard about each and every game.”

The home opener for the Twins is slated for April 3.