The age of Trumputin

The age of Trumputin 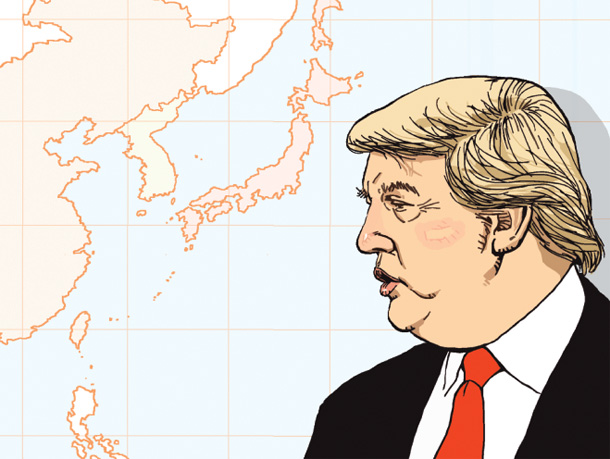 Vladimir Putin must be the biggest contributor for Donald Trump’s election to the 45th president of the United States. Upon the election, Trump was named the second most influential man in the world by Forbes, along with Putin, who topped the chart for the fourth consecutive year. During the election campaign, they revealed mutually good feelings for each other and cornered the Obama administration and Hillary Clinton.

Trump and Putin are similar in many ways. First, they value personal relationships. They could be active together on the international stage for as long as seven years. Second, they are both nationalists. Trump’s slogan, “Make America Great Again” is on the same track as Putin’s “Strong Russia.” Third, they are both pragmatists who focus on specific accomplishments rather than abstract ideas. Fourthly, they prefer one-on-one negotiation. Trump’s experience of making deals is compared to Putin’s outstanding negotiation skills.

The two leaders are expected to prefer one-on-one negotiations from a pragmatic position based on personal relationship for the interests of each country. Putin has been actively involved in the international order to restore the glory of superpower to the former Soviet Union.

But Trump is likely to refrain from intervening in international conflicts based on his “America First” policy. So they can actually avoid conflict of interests as they have a common objective but different methodologies.

Then, what does the Trump administration mean for the Korean Peninsula? We need to take a note that the leaders of the four powers are all strongmen, Trump, Putin, Xi Jinping and Shinzo Abe. But while the opening of the Trumputin era could be a burden for the Korean Peninsula, we can actually expect synergy depending on diplomatic caliber. What Seoul should focus on now are security and the economy.

First, the prime security concerns are North Korea’s nuclear missiles and Thaad deployment in Korea. Russia joined the UN Security Council’s sanctions on North Korea but strictly oppose resolving the nuclear issue by force. While Washington claims that Thaad deployment is a preventative measure, Russia, just like China, considers it a preliminary step for a missile defense system. Considering the European precedence in Poland and Czechoslovakia, Russia could directly deal with the United States and resolve the Thaad issue. Moscow understands that Korea’s stance is limited.

Meanwhile, unlike his predecessor who emphasized democratic ideas, Trump may look at the North Korean issue from a business point of view, calculating gains and losses of the cost for a nuclear resolution and gains from freezing the program. He could propose a surprise deal to freeze North Korea’s nuclear and missiles program. Or he may choose a preemptive strike on the North, which is developing nuclear warhead loading technology on intercontinental ballistic missile that have the U.S. within range.

Also, Trump may approach by pressuring China based on the close relationship with Putin. In fact, Putin has also pointed out that China is reluctant to use its influence on Pyongyang despite the economic assistance it provides to North Korea. Therefore, we cannot rule out the plausible possibility of Trump and Putin working together to seek a peaceful resolution of the nuclear tension and put pressure on China.

Second, trade wars between interested nations is a key concern. During the campaign, Trump made clear his pro-Russia, anti-China stance. While Putin had censured America’s sole hegemony, he has taken a step back since Trump’s election and is willing to cooperate with a U.S.-led international order. President Obama expelled 35 diplomats as “persona non grata” and closed two Russian compounds, Putin did not reciprocate, which is a customary action. Trump praised Putin’s decision and said that Western sanctions on Russia could be removed, sending positive signs that he would seek to restore U.S.-Russia relations. It presents a striking contrast to the acts that irritated Beijing, such as his refusal to respect the One China policy by talking to the Taiwanese president.

Trump’s stance could not only help Putin’s New East Policy and Eurasian Economic Union project but also boost Korean companies expansion to Russia. As the United States dominate the international financial system, Russia is struggling to attract foreign investment, and Korean companies have to take the American financial sector into account when moving into Russia.

Whales not only fight, but can also dance. And we can dance along with the whales. Korea could be sacrificed in the fight of the four strongmen, but we can also enjoy a role of balancer by coordinating their relationships. Now, it is all up to Korea’s unity and diplomatic capability. The grand premise is to overcome the crisis over the Choi scandal and successfully install the next administration.

*The author is a former minister at the Korean Embassy in Moscow.