How to attract Chinese tourists

How to attract Chinese tourists 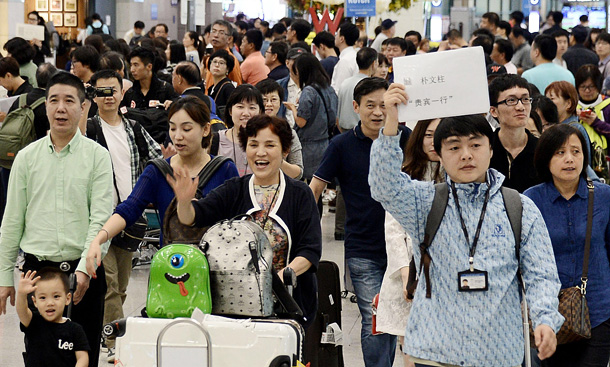 There are mixed reports about the number of Chinese who visited Korea over Lunar New Year. Some say there were fewer tourists and that the industry was hurt by China’s apparent economic retaliation against Korea’s decision last year to deploy a controversial missile defense system known as Thaad.

But if we were to compare the same set of dates — Jan. 27 to 30 — there were 5 percent fewer Chinese tourists this year compared to the 105,000 who visited last year. Merchants might feel this difference more sensitively.

Tourism authorities argue that even if the number of Chinese visitors decreased, Thaad was not the sole cause. As China’s economy remains sluggish and the Chinese yuan weak, tourism has stayed flat, and competition has increased around the world for Chinese vacationers. Morocco, Tunisia, Tonga and Russia recently exempted or eased visa requirements. Depending on where Chinese tourists are headed, the country’s GDP changes. In 2015, 120 million Chinese traveled abroad and spent $104.5 billion. The China National Tourist Office estimates that by 2020, 200 million will travel abroad.

The global tourism industry is focused on the changing travel patterns of wealthy Chinese. High earners with household income of more than 200,000 yuan ($29,349) said they prefer experiences over shopping in a survey conducted by Agility in 2016. When asked what they wanted to do at different destinations, they said experiencing local cuisine and enjoying natural scenery. Shopping came in third.

This is where Korea, as a duty-free shopping mecca, is losing its competitive edge. Top destinations last year were Hong Kong, Tokyo and Seoul, but this year, Chinese travelers said they want to visit the Maldives, Paris and Tokyo. The generation born in the 1980s and 1990s is even more adventurous and listed countries like Morocco, Bhutan and Mexico.

When choosing a destination, the most important criteria were safety (18 percent) and historic remains (14 percent). Safety includes not just protection from terrorism and natural disasters but also health. The MERS outbreak in 2015 and this year’s bird flu could have been factors that made Chinese travelers reluctant to choose Korea. The country fell from fifth in 2014 to eighth in 2015 on Hotels.com’s Chinese website. Nevertheless, Korea’s advantage remains its geographical closeness. The tourism industry needs to approach Chinese tourists more strategically to secure a rightful stake.


*The author is deputy editor of lifestyle news at the JoongAng Ilbo.