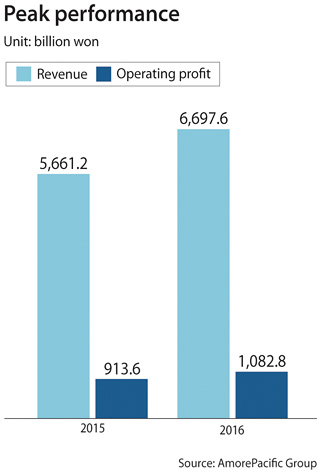 AmorePacific Group’s yearly operating profit surpassed 1 trillion won in 2016 for the first time on diverse retail offerings in Korea and momentum in the global market.

The group’s main affiliate of the same name that owns brands like Sulwhasoo and Laneige raked in 5.6 trillion won in 2016. The country’s No. 1 cosmetics company explained such growth was due to expanded channels of some of its high-end lines.

Sulwhasoo, the company’s luxury line that is popular among older women for its anti-aging products, opened a flagship store in affluent Cheongdam-dong last year. The company said the store played a pivotal role in building up the brand’s luxury image to Asian consumers.

Hera, another high-end brand under AmorePacific, entered the Chinese market last year for the first time with its fortified makeup line.

Sulwhasoo expanded its retail offerings in China by opening storefront and shops inside department stores.

AmorePacific’s sales performance in North America region also saw a boost. It grew 10 percent in 2016 compared to the previous year as the company opened Sulwhasoo and Laneige shops in Canada.

Sales of the group’s other affiliated brands that are not under AmorePacific, such as Innisfree and Etude House, also surged.

Innisfree, a nature-friendly brand that is in the lower price range, had a 30 percent year-on-year soar in revenue of 767.9 billion won. Its operating profit was 196.5 billion won, a 56 percent growth compared to the previous year. Innisfree focused on adding a cultural kick to its stores so consumers could better understand its brand. The company opened a shop with a cafe inside and a shop with a virtual-reality zone where consumers could experience Jeju Island with model Lee Min-ho.

Meanwhile, the group’s household product business performed poorly last year due to the massive recall of its toxic toothpaste line in September.

“In addition to the recall cost, the depressed domestic economy took toll on the company’s Q4 performance in Korea,” said a spokesperson.