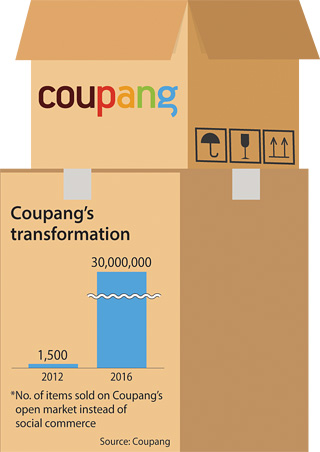 The company has been gradually reducing its daily deal service since 2014, but this is the first time Coupang has officially announced a complete discontinuation of the service.

“We are excited to complete this transformation,” said Navid Veiseh, Coupang’s senior vice president of global e-commerce. “Our customers have made us Korea’s fastest growing e-commerce business. We are accelerating technology investments and are committed to creating a superious customer experience across each of our business categories, including travel, cross-border shopping and rocket pay service.”

Sales from Coupang’s social commerce service have been dwindling for some time. In 2016, less than 0.2 percent of annual revenue came from daily deals, according to the company.

“Becoming an e-commerce platform means we are focusing on what we do better,” a Coupang spokesperson said.

Coupang was founded in 2010 by Bom Kim as a Groupon-inspired daily deal platform and became one of the key players that prompted a social commerce boom in Korea.

In 2014, the company decided to switch directions toward becoming an open online market for vendors. It became best known for its “Rocket Delivery” service staffed with its own deliverymen who ship items within 24 hours. The deliverymen even leave handwritten notes on the parcels. Such a speedy service was an industry first in Korea.

Coupang said its transition to an e-commerce platform received better responses from customers than its social commerce service. The number of products sold on Coupang’s open market jumped from 1,500 in 2012 to 30 million in 2016, and last year, Coupang delivered 450 million items, according to the company.

The social commerce model based on offering daily deals has been on a downhill slide in the past few years. The platforms lost ground when open online markets like Gmarket and 11st started offering bigger discounts on their products, cutting into the platforms’ main advantage of low prices. Brick-and-mortar retail giants also started turning toward online channels.

Two of Coupang’s biggest rivals, Ticket Monster and WeMakePrice, said they have no plans of discontinuing their social commerce service anytime soon.

“Purchases made on social commerce deals definitely shrunk compared to when we first started business,” a WeMakePrice spokesman said. “But at the moment, we are going to expand the service and product lineup available on social commerce.”

Ticket Monster has reduced the number of items offered on its daily deals, according to a company spokesman, but it is going to continue its service.