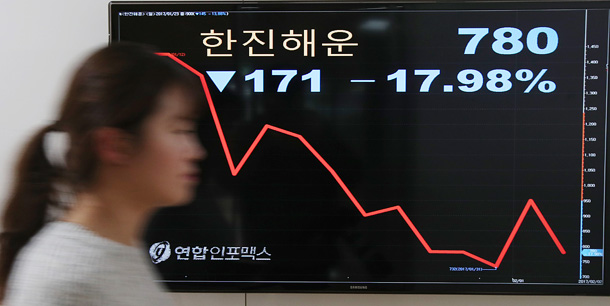 A board at Yonhap Infomax in Jongno, central Seoul, on Thursday shows Hanjin Shipping stock trading suspended for the remainder of the day after its share value tumbled nearly 18 percent. [YONHAP]

After a 40-year history of connecting Korea to the world, the nation’s largest shipping company and the world’s seventh largest has lowered its sails for good.

On Tuesday, a court decided to call off a restructuring program for Hanjin Shipping.

The decision came five months after the company went into court receivership after failing to negotiate its debts with creditors on Aug. 31. The result was chaos in ports around the world and among the company’s many customers and many layoffs in Korea, which will now increase.

The Seoul Central District Court announced Thursday that it decided to end the debt rehabilitation proceeding as most of Hanjin Shipping’s major assets has been finalized.

The court plans to officially announce the bankruptcy of the company on Feb. 17, which will start the process of distributing remaining assets among creditors.

Employees and creditor banks will be the first to be paid from the sales of remaining assets of Hanjin Shipping, while private investors who bought the company’s corporate bonds will come next - if there is any more cash.

There may not be as Hanjin Shipping’s borrowing from banks amount to 1 trillion won ($872 million) including roughly 700 billion won from the Korea Development Bank. The banks have largely hiked their bad debt allowances to prepare for the bankruptcy.

Hanjin shares tumbled more than 17.9 percent to 780 won near noon Thursday as rumors spread that it was nearing bankruptcy spread.

This forced the Korea Exchange to halt trading of Hanjin Shipping shares for the remainder of the day starting at 11:24 a.m. It requested the company respond to the rumors.

That was a turnaround from the previous day when trading in Hanjin shares hit the market maximum limit of 30 percent. The price again surged more than 24 percent when the market opened on Thursday on news that Hanjin had sold the remainder of its key assets.

Earlier on Thursday, the company said in a regulatory filing that it completed a sale of shares of Hanjin Shipping Tec (HTEC), which is an equipment-leasing company, and Total Terminals International, a container terminal in Long Beach, California, on Wednesday.

According to the report, Terminal Investment Limited, which is an affiliate of MSC, the world’s second-largest shipping group based in Switzerland, became the largest stakeholder of HTEC with an 80 percent stake, while the Korean shipping company Hyundai Merchant Marine became second by purchasing the remaining 20 percent. HTEC was sold for $5.5 million.

TIL owns 80 percent and HMM 20 percent of Hanjin Shipping’s terminal in Long Beach, which was sold for $72.5 million.

Hanjin has already sold some of its key assets, including its U.S. routes and Asia routes, to S.M. Shipping.

In December, the accounting firm Samill PricewaterhouseCoopers in a due diligence report proposed the liquidation of the company.

It estimated the total assets value of Hanjin Shipping at around 2.73 trillion won with debt totaling 3.53 trillion won.