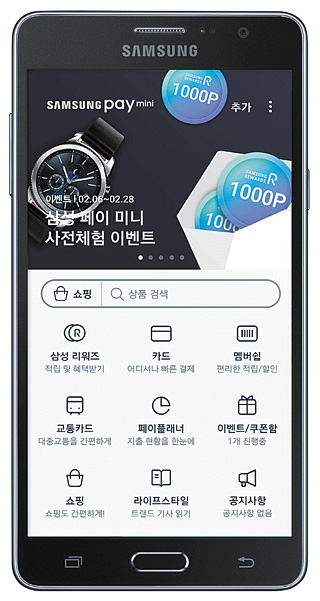 Samsung Electronics is set to release an online-shopping version of its Samsung Pay mobile payment system next month that will be compatible with non-Samsung smartphones powered by the Android operating system.

Named Samsung Pay Mini, the new payment app allows users to shop and pay for goods online if their smartphones are powered by Android’s 5.0 Lollipop or later versions and have high-definition displays.

A spokesman for Samsung said the company came up with the Mini version because its 5 million users wanted such a new payment method for online shopping.

Samsung Pay, released in August 2015, lets users register their debit or credit cards on the app and use the smartphones - limited to the Galaxy S and A series as well as Note lineup - to make payments, eliminating the need to carry cards. The app can be used at stores and restaurants accepting either magnetic strip cards and nearfield communication (NFC) systems, which is used on public transportation in Korea.

Samsung has also updated its Samsung Pay system by added a “shopping” section on the app to direct users to major online shopping malls and a “reward” section that offers loyalty benefits depending on the amount of payments made.

On the prospect that the global mobile payment market will grow 25.8 percent this year to reach $780 billion, according to market researcher TrendForce, smartphone manufacturers and other tech firms are scrambling to build and popularize their own online payment ecosystems.

Google’s Android Pay is expected to arrive in Korea soon. Launched in September 2015, Android Pay has entered a number of countries around the world including Japan last December. Apple Pay has shown no signs of launching in Korea, home turf for Samsung.

“Among the smartphone makers that are also developing mobile payment businesses, Apple and Samsung are two brands that have an advantage over their competitors,” says Kelly Hsieh, senior research manager of TrendForce. “Since Android has over 50 percent of the mobile OS market share worldwide, Google also has an opportunity to build up an extensive mobile payment ecosystem.”

LG Electronics is rumored to be embedding its own LG Pay in its next flagship G6 smartphone, scheduled to be unveiled on Feb. 26 in Barcelona at the Mobile World Congress. LG patented the system in August 2015 but its commercial application has been delayed.

Mobile payments are growing at a rapid pace in Korea.