A gamer gets in on the action in ‘Fabricated City’ : Director Park Kwang-hyun’s foray into new genre has thrills for all

A gamer gets in on the action in ‘Fabricated City’ : Director Park Kwang-hyun’s foray into new genre has thrills for all 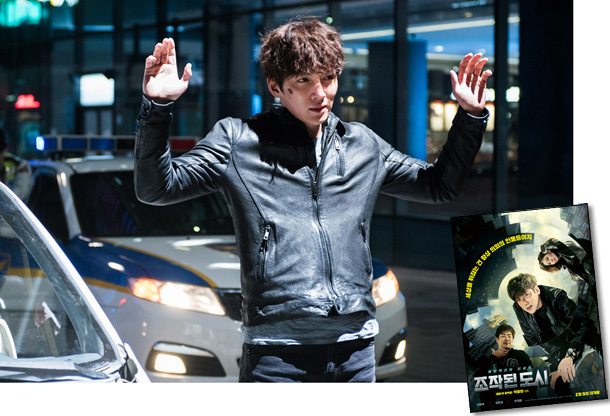 The upcoming “Fabricated City” diverges from typical action films with new types of characters and the portrayal of a game-like world. [CJ ENTERTAINMENT]

For many years, the action genre has produced some of the most successful box office hits and has become a strength of the Korean film industry. The exciting action scenes and thrilling revenge storylines usually featuring a strong, smart and righteous lead character satisfies audiences looking for a good time at the theater. But for those who have grown tired of the genre’s familiar characters that always seem to include either a special agent or a detective (as evidenced by the recent “Confidential Assignment” and “Master”), the upcoming “Fabricated City” is a fine option.

Helmed by Park Kwang-hyun of the 2005 hit “Welcome to Dongmakgol,” which sold more than 6.4 million tickets, his newest and first action flick follows a jobless yet skilled gamer Gwon Yu (Ji Chang-wook), who one day gets framed as a rapist and murderer of a teenage girl after getting a mysterious call from an unknown woman. After going through all sorts of ordeals in jail, Gwon Yu breaks out and teams up with his fellow gamers, including reclusive hacker (Shim Eun-kyung) and a newbie film crew member (Ahn Jae-hong), to seek revenge against the man that brutally set him up.

“I wanted to make a movie that anyone can comfortably enjoy,” said the director during the press preview held in Seongdong District, eastern Seoul, earlier this week.

“I included game elements to differentiate the film from other crime action films that usually put either special agents or former detectives at the center,” Park, who is releasing his first Korean film in 12 years, also explained the game-like world portrayed in the movie. “I hoped to make people feel that ‘this is how it feels when you play a game.’”

Since Park lacked experience directing flashy action scenes, he tried to differentiate his movie by filming extended and more detailed car-chase scenes, which he described as “uncommon in Korean films.”

Though it is a feel-good movie laced with humor, the filmmaker also tried to deliver a message to struggling youth.

“Many young people today are feeling discouraged [due to the difficulties in getting employed amid the struggling economy],” said Park and continued, “The older generation tends to think that young people who don’t fit into the frame they believe is right are losers. However if you look at them closely, every single one of them is lovely in their own way.”

As it was Ji’s first main role on the silver screen, the actor felt a lot of pressure throughout working on the film.

“I thought a lot about whether I should participate in the film after reading the script because I wasn’t sure whether I would be able to lead the movie as the main character,” Ji said. “However, after meeting the director, I felt more comfortable.”

Shim expressed a similar view about her confidence in the director.

“I have long wished to work with Park Kwang-hyun. After hearing that [Park] was getting ready to direct ‘Fabricated City,’ I showed interest even before the script was released. And when I was given a hacker role, I decided to join because her refreshing character mesmerized me. I believed that a new kind of action genre would be created in Korea.”

“Fabricated City” will hit theaters nationwide on Feb. 9. It runs for 126 minutes, and is rated 15 and over.