Daegu’s chatbot can help with passports

Daegu’s chatbot can help with passports 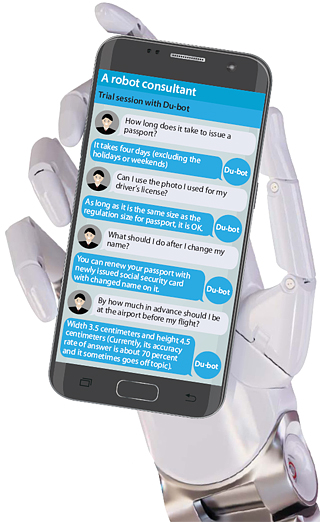 The era in which artificial intelligence replaces people in menial jobs may be right at our doorstep. AI will provide routine services to the general public in Korea and answer questions soon.

Starting in March in Daegu, some 235 kilometers (146 miles) south of Seoul, a chatbot known as “Du-bot” will consult citizens on issues related to passports, and will be accessible through mobile devices or computers 24/7.

Essentially, in the near future, while certain jobs will become obsolete, new jobs, more specialized and advanced, will emerge.

“It must be able to provide detailed information on passport-related issues and react to questions in 0.1 seconds,” Park Gwi-hee, an official at the Daegu City government, said. When asked what she was working on, Park said she was training Du-bot.

“Du-bot is the name of Daegu City’s chatbot,” said Kim Nam-hyun, a director at Elgen ICT, a tech company based in Asan, South Chungcheong. “We are cramming in all the information into the system including questions and answers as well as regulations related to passports.”

On March 1, the first chatbot programmed to provide administrative service to the public will be launched. Its first job is to answer questions and provide information about passports. As computer programs are made for conversation, consumers can access the service by Du-bot through a chat application on their smartphones or through a designated website. So far, Du-bot has studied 951 questions and answers related to passports. It also has memorized 286 pages of related regulations.

The mechanism that Du-bot uses in its operation is simple. Du-bot omits punctuation marks when reading a sentence. It then uses certain key words from the sentence and compares them with the data it has stored in its database to show answers.

A reporter from the JoongAng Ilbo had a chance to test the chatbot. As soon as the site was accessed through a smartphone, Du-bot greeted the reporter. When asked how many days it takes to issue a passport, Du-bot answered, ”It takes four days.” Even when the word passport was misspelled, Du-bot was adept enough to recognize it and provided a correct answer.

But when the reporter threw a question somewhat unrelated to passports, the chatbot went off topic. For example, when asked how early a person should arrive at the airport before departure, the chatbot answered, “width 3.5 centimeters and height 4.5 centimeters.”

“The system’s ability to assemble words to create sentences still needs some work,” said Kim. “Right now, the accuracy rate of its answers is about 70 percent but we hope to bring that figure up to 90 percent in a year.”

“It took about a year to develop this program,” the director added.

Once Du-bot goes fully operational, it will replace some of the positions held by a number of civil servants in the city. Right now, about 45 civil servants city-wide are doing work related to passports. Together, they issued about 22,000 passports last year. With Du-bot taking over their jobs, the city government workforce may shrink. About the matter, a high ranking official from the Ministry of the Interior doubted its capacity to replace people and said, “the chatbot can only provide standardized answers and it cannot understand complicated context.”

A director from Daegu City government, however, said they may have to think about how to allocate civil servants in the city when Du-bot becomes more advanced to the point where it can perfectly answer any questions and take care of more complex issues.

“Depending on the result of the pilot project done by Daegu, we will decide whether to expand the service nationwide,” said Jang Su-wan, director of the public service policy bureau in the Interior Ministry. “We may also be able to use similar programs in affairs such as vehicle registrations.”