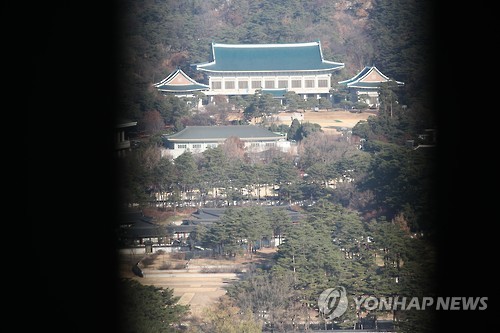 This file photo, taken from the government complex in Seoul on Nov. 29, 2016, shows a view of the presidential office Cheong Wa Dae. [YONHAP]

The investigation team looking into the scandal visited Cheong Wa Dae to secure more data ahead of a face-to-face interrogation of the president that is likely to take place later this month. The Seoul Central District Court on Thursday issued the warrant for search and seizure.

It marks the first time the team, led by Independent Counsel Park Young-soo, has tried to carry out a raid since it launched the investigation in December.

Still, the presidential office is expected to deny them access, citing security concerns.

State prosecutors, who handed over the case to the independent counsel last year, attempted to raid the office in October but were halted by the presidential office. The office, instead, voluntarily turned over some documents requested by the prosecutors.

Under the country's law, military facilities and other areas that handle confidential information cannot be searched without approval from the person in charge of the location. Yet, the law also prohibits the person from refusing to grant such consent unless it infringes upon key national interests.

The two sides are in talks over when and how to carry out the questioning of Park, who is now awaiting the Constitutional Court's decision on her impeachment motion. She has been accused of letting her close friend Choi Soon-sil meddle in state affairs and amass personal profits using her ties to the president. Both Park and Choi have been flatly denying the allegations.