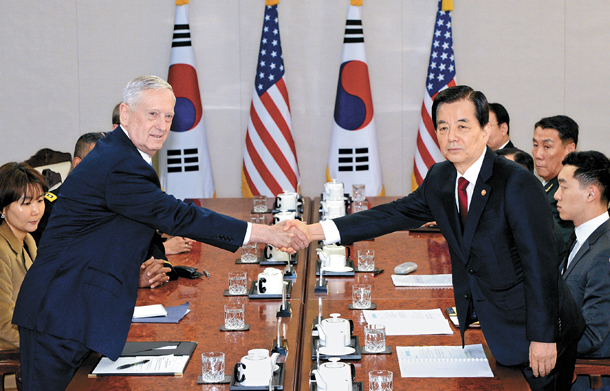 U.S. Secretary of Defense James Mattis and Korea’s National Defense Minister Han Min-koo confirmed Friday their resolve to respond strongly to military provocations from the North, which includes the installation of a U.S.-led antimissile defense system on the peninsula within this year.

“Due to North Korea’s threatening rhetoric and destabilizing behavior, we are taking defensive steps like deploying the highly effective Thaad antimissile unit to the ROK [Republic of Korea] to protect its people and our troops that stand with our ally,” Mattis said in a press briefing at the Ministry of National Defense on Friday, referring to the antimissile Terminal High Altitude Area Defense system. “Our alliance is a testament to mutual commitment and respect, and it is a linchpin of peace and stability in the Asia-Pacific region.

“America’s commitments to defending our allies and to upholding our extended deterrence guarantees remain ironclad,” he added. “Any attack on the United States, or our allies, will be defeated and any use of nuclear weapons will be met with a response that would be effective and overwhelming.”

“The defense secretary’s visit to South Korea shows the resolve and the regard the Donald Trump administration has toward strengthening the bilateral strategic defense cooperation here,” Han said. “The visit itself sends a strong warning to Pyongyang and stands as a message of firm resolve against nuclear and missile developments in the North.”

The Ministry of National Defense said in a statement that the two leaders confirmed their agreement to install the Thaad antimissile system within this year. Media reports have previously suggested that Washington and Seoul have agreed to deploy the Thaad system by July.

But some analysts said Mattis’ decision to visit Korea before any other country was meant to cement the Thaad deployment in Korea before an administration change in Seoul.

President Park Geun-hye has been impeached by the National Assembly for a power abuse and corruption scandal involving her and longtime friend Choi Soon-sil. If Park’s impeachment is confirmed by the Constitutional Court, a presidential election will be held earlier than its normal schedule in December.

“I think it’s likely the U.S. secretary of defense requested a swift deployment of Thaad on the peninsula, because from the perspective of the U.S. government, it’s already been months since the North conducted a successful Musudan missile launch last June,” Go Myong-hyun, a research fellow specializing in risk, information and social policy at the Asan Institute for Policy Studies in Seoul told the Korea JoongAng Daily. “The general expectation is that the Thaad system will be deployed between May and July, but with so many members of the White House National Security Council having a general anti-alliance attitude, I think Defense Secretary Mattis would want to get the system deployed as soon as possible.”

Analysts outside Korea have also predicted an earlier-than-expected Thaad deployment.

“At the very least, Secretary Mattis will want to leave little doubt that the U.S.-ROK alliance is robust and ready for all contingencies,” said Patrick Cronin, senior advisor and senior director of the Asia-Pacific Security Program at the Center for a New American Security in a policy analysis. “Specifically, Secretary Mattis and his Korean counterparts are likely to seek to accelerate the deployment date of [the Thaad] battery so that it happens prior to the next Korean election.”

“At this rate of cooperation between Seoul and Washington,” said an insider at the Foreign Ministry under the condition of anonymity, “even if there is a change to the administration in Seoul earlier than expected, the Thaad system is expected to be deployed to an extent that cannot be rescinded by the incoming administration.”

Lotte Group, which owns a golf course in North Gyeongsang’s Seongju County that was selected as the site for the battery, held a board meeting on Friday but failed to reach a decision on handing over the land to the Ministry of National Defense.

“Discussions on the details of the deal will continue for a while,” said an employee of the policy department of Lotte.

“The group’s agreement to swap Lotte Skyhill Seongju Country Club with government land in Namyangju, Gyeonggi, still stands, but there are more details to be discussed about the deal’s feasibility. We expect the whole process to end within this month.”

After clearing legal and logistics hurdles in Korea, the actual deployment of the U.S. antimissile defense system may take less than four days. The U.S. military explains in its manual on Thaad that one Thaad missile battery can be installed within 72 hours anywhere in the world using a Boeing C-17 military aircraft.

He stated that the U.S. government’s defense strategies for the South can be “count[ed] on 100 percent,” according to the Foreign Ministry.

The Foreign Ministry emphasized in a statement that the Thaad deployment will be pursued “under the agreement that it doesn’t harm the interest of other countries,” addressing the concerns of Chinese and Russian governments on the deployment.

Russian Ambassador to Seoul Alexander Timonin said Friday that Moscow “will have to take certain types of countermeasures” should the deployment of Thaad be completed.

The U.S. defense chief travelled to Tokyo on Friday afternoon and met with Japanese Prime Minister Shinzo Abe. The two are expected to discuss continued bilateral military cooperation, including Washington’s nuclear umbrella in the region. Trump and Abe are expected to meet at a summit next month in Washington.