Valedictorians aren’t all work and no play

Valedictorians aren’t all work and no play 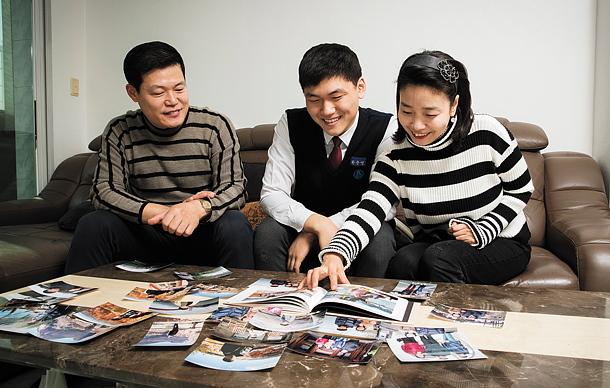 Hwang Sun-yeong, middle, an 11th grader at Yeongdong High School in southern Seoul, chats with his parents while looking at pictures of their family vacation. According to experts, students whose accomplishments are acknowledged by their parents have a greater sense of accomplishment and can better withstand failure. [CHA JIN-YEONG]

There is a common thread tying Korea’s high school valedictorians together. Rather than a spartan single-minded stride towards academic excellence, these students found success through household harmony.

“I played to my satisfaction during elementary and middle school. As a result, I was able to concentrate on my studies [in high school],” said Park Shin-hye, a 12th grader at Eonnam High in Seoul.

“My mother and father, they never forced me to do anything,” said Kim Yeong-ju, an 11th grader at Moonil High in Seoul. “Instead, I had to make good on my promise to take responsibility for my studies.”

Excellent grades aside, what these valedictorians share is that they each enjoy their parents’ trust. These are the results of the analysis of 81 students introduced in the JoongAng Ilbo’s “Valedictorian’s Desk” column from June 2013 to the present. The column details high school valedictorians’ daily habits, study methods and parents’ pedagogical approach.

Park is entering Korea University’s department of life science this spring. “It was an area I was interested in and my parents supported me to do as I wished,” said Park. “I’m thankful to my mom and dad, who believe in me and watch over me.”

“In the end, the individual is the one who studies,” said Kim Eun-gyeong, Park’s mother. “I think the role of a parent is to wait for their child to find what they want to do, even if they take a few detours along the way.”

Though the learning processes and the personalities of valedictorians differ, the dispositions of their parents were similar. Rather than stressing study, parents focused on household harmony and took their children’s choices into consideration. The rationale being, if the household is harmonious, success will follow.

It was once for parents of valedictorians to find and recommend academies or admissions information to their children.

“I thought it would be great if Yeong-ju could go to a specialized high school with a dormitory or autonomous private school,” said Park Hae-suk, the mother of a student attending a regular high school. But after suggesting it, her son said he disliked the idea and she did not press the matter further. “I think he felt a sense of responsibility for having gone to a regular high school.”

“Since I was young, when I woke up in the morning and went to the living room, my father was always there reading a newspaper or book,” said Kim Yong-hun, an 11th grader at Kyunghee High in Seoul, commenting on the impact of parents who lead by example. Kim followed his father’s example and familiarized himself with literature.

There are many valedictorians with reading as a hobby.

“There are many valedictorians who read as a hobby,” said the principal of Whimoon High in Seoul. “Thanks to consistent reading, students are equipped with the basics of vocabulary, expressiveness and critical thinking.”

Many of the students said they could have comfortable conversations on any subject with their parents, and often parents would praise and encourage their students in those conversations.

“Sometimes, my mom would praise me many times to the point of making me feel embarrassed,” said Kwon Hye-min, an 11th grader at Jamsil Girl’s High in Seoul. “Because my mom believed in me, I came to study even harder.”

“I was never scolded,” said Park Sang-ha, a 10th grader at Whimoon High in Seoul, “not even once for having low marks. My mom would say, ‘Since you worked hard, don’t dwell on the results. After talking with my parents, I could shake off my stress.”

But being valedictorians does not equate to never tasting failure. There are numerous cases where students attempted to enter autonomous private high schools or specialized high schools, only to experience rejection.

Hwang Sun-yeong, an 11th grader at Yeongdong High School in southern Seoul, is one of those cases. After failing to enter the Korean Minjok Leadership Academy, he was in despair. His disappointment worsened when a friend of his with lower grades was admitted. After his disqualification, he began online gaming often. His parents watched over their son and instead of urging him to study, they chose to take a family vacation.

“If my parents had pressed me,” he said, “I would have hated studying out of pure defiance. I was so thankful to my parents.”

“Parents should be a support their children can always depend on,” said his mother, Lim Seong-yeon. “When children are in a difficult place, believing in them and waiting for them is a parent’s most important role.”

“After the Coleman Report, it became accepted as orthodoxy that intimacy between parents and their children and household environment were the most influential factors when it comes to academic performance,” said Song In-seob, professor emeritus at the department of education at Sookmyung Women’s University. “There is a trend now where students whose effort is recognized by their parents have a greater sense of accomplishment and are better able to overcome failure.”