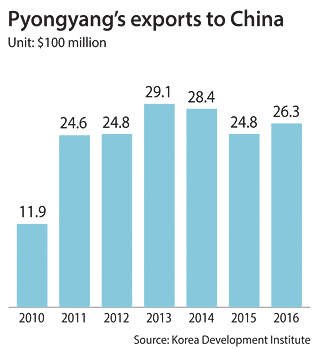 While the world community has been strengthening economic sanctions against North Korea, recent data show that the country’s economy has improved.

North Korea’s exports to China, which dropped for the second consecutive year, in fact, rose 7 percent year on year in 2016, according to the Korea Development Institute. Pyongyang’s exports in general rose 6 percent year on year to $2.6 billion largely due to the expanded amount of anthracite exported to China.

“Although the Chinese economy has slowed recently, North Korea’s exports to China have risen instead and it appears the economic sanctions toward the North have limited impact on the country’s economy,” the KDI said in a report released Sunday. “North Korea’s exports to China have risen mainly due to the expanded export volume of raw materials such as anthracites. Many have expected that the economic sanctions will drag down North Korea’s trade but the research found them to be ineffective. There are no clear reasons behind the rise in North Korea’s trade but one thing that’s clear is that it has improved.”

The research also showed that Pyongyang’s prices of consumer goods and currency have stabilized.

According to the KDI, the exchange rate of North Korea’s currency dropped 1 percent year on year in 2016 as rice prices dropped 0.7 percent.

“In the 2000s, North Korea experienced heavy inflation and a rise in its exchange rates as the economy has really been unstable,” said the report. “However, it appears that such a trend has disappeared in the country. North Korea’s economic situation in 2016 can be summarized as ‘relatively stable’.”

The KDI said the UN’s decision to lower the export quota of North Korea’s anthracite is going to reduce the amount that the country earns from exporting the material by $700 million.

“If the amount of foreign currency that North Korea gains from exporting drops, it will hurt the country’s market significantly since it is heavily dependent on foreign currencies,” said the KDI. “It will lead to a drop in market trade, significant rise in consumer prices and a fall in number of investments.”

Feb. 10 marks the one-year anniversary of Seoul’s decision to shut the Kaesong Industrial Complex, the last remaining economic cooperation project between the two Koreas, after the North tested a nuclear bomb a month before. There hasn’t been an economic relationship between the two since.

There are no signs the complex will run again as Seoul argues that it is against the UN economic sanctions against the North.