Finding the right spot for a start-up : Co-working spaces have become popular, but costs burden entrepreneurs

Finding the right spot for a start-up : Co-working spaces have become popular, but costs burden entrepreneurs 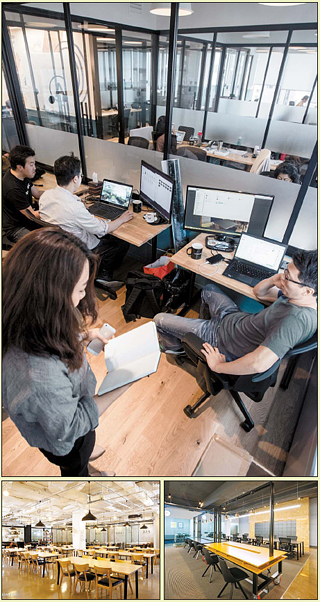 Top: American brand WeWork is one of the largest shared offices in Seoul, preparing to launch its third branch in the city.

Co-working spaces, or shared offices, are quickly becoming the new norm for start-up entrepreneurs and employees who have the flexibility to work from home or elsewhere. The trend began to catch on in Korea over the past few years, and today, just in the Gangnam district in southern Seoul alone, there are about 150 co-working spaces.

With rising competition to attract millennial entrepreneurs and employees, more and more high-end and trendy offices began to emerge in Seoul, providing members with the basic necessities of an office like printers and phone booths, but also with luxuries like shower facilities, capsule beds for naps and a bar for a drink of beer, to name some.

Such co-working spaces that promote themselves as the optimal space to work and network are, however, a pie in the sky for many.

“It’s certainly out of my reach,” said Kang Seung-hoon, a 33-year-old rookie to the start-up world, and the father of a 13-month-old son. Kang used to work as a reporter for a magazine, but decided to start his own business of setting up a webzine for travel journals. He quit his job about a year and a half ago, and it’s been about 10 months since he established his company.

“At first, I went around cafes near my place to work, but I just couldn’t concentrate in there for so long,” he said. “Plus, you can’t sit there for hours and just order one americano. It costs a lot too.”

To be more efficient, Kang began to look for spaces where he could focus better and came to learn about the shared offices that had started to spring up throughout the country.

“It was a new world for me,” he recalled. “I mean, anyone who’s starting a business would want to set up a nice new office and start from there, but to do so, you need to rent it for at least two years, pay deposits, fix the interior, buy office supplies and so on. It costs a lump sum and you just can’t risk so much in the beginning unless you are starting off with a large capital.” 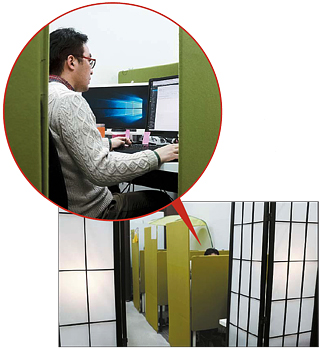 Kang Seung-hoon, 33, of Bundang, Gyeonggi, rents a co-working space in Gangnam, to work on his start-up. [YIM SEUNG-HYE]

According to Kang, the majority of start-up entrepreneurs are “not that lucky” and they have to do whatever they can to cut back expenses until the business shows some profit.

With high hopes of working at a trendy office space with similar people, Kang visited a few co-working spaces in Gangnam district. But once he realized how much it costs per month, he was let down and had to lower his standard a bit.

“The ones that look like they’ve spent tons on interior and offer great services are at least 500,000 won [$439] per month,” Kang said. “For a person who just started a business that is draining money, and also has a toddler at home to take care of, that’s just too much.”

Giving up his hopes of taking a shower and a sipping on some beer during work, Kang lowered his level of expectation and found a shared office, Space 332 near Seolleung Station in Gangnam. Having to pay 300,000 won per month was a still a bit expensive for him, but Kang decided to stay since it was a lot cheaper than the others he visited. The space Kang rented was one seat of an open desk style office, where one person shares a large table with others. There are no partitions between seats but each person gets their own outlet.

“At first, I didn’t really mind sharing the desk as I thought I could mingle with other people and talk about business ideas in this kind of atmosphere and perhaps even find business partners,” Kang said. “That’s what these open desk style co-working spaces promote themselves as - ‘a true place to work and to network.’”

But soon after, Kang realized that this style doesn’t quite agree with Korean sentiment. “Everyone, including myself, was so busy trying to get things done and settle things down for their new business, just so you can stop pouring money down the drain and finally make a profit. So nobody really talked with others that much.”

To provide more networking opportunities, the co-working spaces began to organize events such as year-end parties, or pizza nights on the house.

Moreover, according to Kang, most of these co-working spaces require members to pay deposits of two to three months making an almost “lump sum for these kind of spaces as well.”

“Of course you can’t call it a lump sum when you compare it to renting a private office, but when you come in thinking all you need is 300,000 won to start off, but suddenly find yourself having to pay about 900,000 won at once, it really burdens people like me,” Kang said.

Although Kang liked the location, taking less than 30 minutes by subway from his place south of Seoul, he had to look for a cheaper place after two months.

The next co-working space he went to was near Gangnam Station, called Idea Factory. It was only 80,000 won per month and he didn’t have to pay any deposit. Since it was open from 9 a.m. to 10 p.m., two hours more than his first office, he unpacked his bags here, which was also an open desk style.

“Because it was cheaper than the other co-working offices, the users had to pay extra to use printers for example. But other than that, it was a perfect price for me,” he said.

But Kang only ended up staying for a month.

“I operate a webzine, so internet speed is crucial,” he said. “Others seemed to have no problems, but it just wasn’t fast enough for me. Perhaps it’s because I have to download and upload a lot of pictures.”

That’s when he found the current space, Auctionary Office, right outside exit No. 1 of Gangnam Station. He pays 220,000 won per month and has been extending each month since July. Unlike his two previous offices, Kang is designated a desk with partitions, similar to a reading room for students.

The main entrance opens with a fingerprint of each member, allowing them 24-hour access. There’s also a meeting room that members can use upon booking in advance.

“Meal costs can’t be neglected. I try to find a meal that costs around 7,000 won but it’s not that easy here in Gangnam,” Kang said.

“For us, it’s a luxury to even make the time to mingle and network, or even to complain about how narrow the spaces are here,” said Kang

“I’m thankful that the concept of shared-offices exists but me and the others here who are in a similar situation, only think of one thing: to get out of here as fast as we can and have our own private office.”