Earlier this week, a post on an online Korean forum was making the rounds on the internet. The person claimed she was able to get a baby bottle for free using 15,000 credit card points that she had completely forgotten about but managed to secure using a website that tracks people’s dormant credit card points.

The website, cardpoint.or.kr, was so overloaded on Tuesday that it crashed.

“Traffic grew significantly as there were more people trying to find out how many points they have before they expire,” said a representative from the Credit Finance Association, which runs the site. 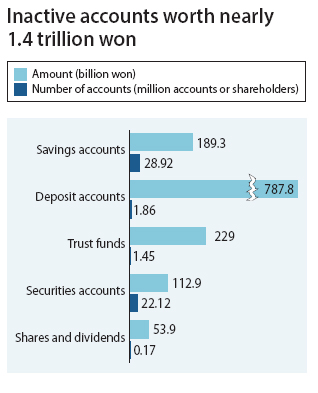 In Korea, credit card points disappear if they are not used within five years, but many are unaware of the expiration date and fail to redeem them in time. In 2015, expired credit card points amounted to 116.2 billion won ($101.3 million).

The Financial Supervisory Service, the country’s financial regulator, has made it easier for credit card users to redeem their points and use them all before they expire. In the past, users could only use points to cover up to 50 percent of a product.

Now, users who open up new credit cards this year can use as many points as they want at once, even to get stuff for free. Hana Card is going an extra step, allowing its existing customers to use all their points when buying products.

The Credit Finance Association, a group representing Korean credit card and financing companies, started cardpoint.or.kr in 2012 to help credit card users track their points, and it has recently been gaining popularity. Anyone can log in with certificate verification information provided by their financial institution. After the authentication process, users can find out how many points they have and when they expire on all their cards, no matter which company they are from. Ten credit card companies, including Lotte, BC, Samsung and Shinhan, are participating in the project.

More than 2.57 million people have used another website, payinfo.or.kr, which allows them to find inactive savings accounts under their name. The Korea Financial Telecommunications and Clearings Institute, which manages interbank payments, opened the website last December, and more than 20 billion won has so far been retrieved from 2.78 million accounts.

Individuals can find information about bank accounts that have been dormant for more than a year and transfer money into accounts they regularly use. People also have the option of donating their money.

“I found out there was about 50,000 won in a bank account I used in college,” said a 39-year-old surnamed Sung. “It felt like I got some unexpected money.”

People who invested in stocks when market conditions were good but then forgot about them later can also collect on their returns. Investors could ask securities firms individually, but they can more easily find the information on a website operated by the Korea Financial Investment Association, kofia.or.kr, where they can search their stock market accounts with less than 100,000 won that have been dormant for more than six months.

If the stock was not purchased through a securities firm, such as through individuals’ own computers, inactive accounts have likely gone to the Korea Securities Depository. The depository, too, has a website, ksd.or.kr, where people can claim their accounts. According to the Korea Securities Depository, stock that was not retrieved by investors reached 4.67 million shares, amounting to about 10,000 shareholders, as of last October.

In the past four years, 2.24 million shares worth nearly 21.3 billion won have been returned to investors. In one famous case from 2014, a woman in her 60s received 206 shares of AmorePacific worth nearly 130 million won. She worked at a department store run by Pacific Corporation, the predecessor of AmorePacific, from 1972 to 1976 and received shares from the company. She had forgotten about it for more than 30 years.