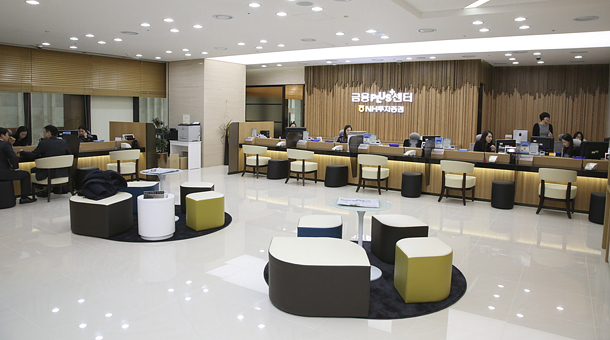 Last month at Samsung Securities’ financial center, Jeong Bum-sik, who heads the brokerage firm team in charge of bonds, lectured to 50 or so officials in charge of financial management at nonprofit organizations.

“In the last three years there has been a decoupling between Korean yields and those of U.S. treasuries’ whether it’d be 30 years, 10 years or even 5 years maturity,” Jeong said at the center in Seocho-dong, Gangnam. “Even if the U.S. decides to make additional raise in its interest rates, it won’t be easy for the Korean central bank to follow that decision.”

He added that because of social problems, including high household debt and a low birth rate, Korea’s economy will continue to decelerate.

Park Dal-soo, who represented a logistics foundation, said the lecture was helpful. His foundation will consider holding its bonds until they mature rather than sell them off regardless of changes in interest rates. 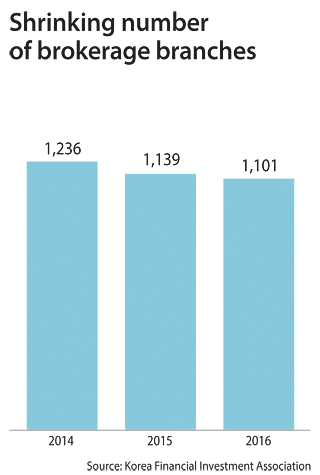 Park, 56, who runs a small and midsize automotive parts supplier, recently visited the financial center of a brokerage firm that was introduced by a close friend. He met with three officials including the head of the financial center, private bank consultant and a tax accountant. He was impressed by the brokerage firm’s service in analyzing the company’s financial situation and suggested an investment strategy.

The brokerage firm proposed a product that could increase the interest 2 to 3 percent on a 6 billion won ($5.3 million) deposit with a 1-year maturity.

The product invests half of the 6 billion won on a derivative, equity-linked bond (ELB), and places the rest in a 10-year maturity treasury.

The automotive parts supplier also has roughly $1 million in the company’s safe as it is an exporter. The brokerage firm proposed of investing it in a foreign currency deposit trust that not only hedges currency exchanges but also adds profit through interest.

“Until now we placed the company’s money in a deposit account so that we could withdraw cash whenever we needed,” Park said. “But through the consulting service we learned that there are various [financial] products available.”

Brokerage firms have recently been opening financial centers that provide consulting on corporate investments around Gangnam. Because these centers have combined three to four branches, the size of the offices or the employees available are three times larger than those of previous branches.

On average, they cover 1,000 square meters (10,763 square feet) and consist of a consulting room, lecture hall and even a rest room. There are about 100 employees at these financial centers, which include investment bank experts, tax accountants and even lawyers to provide more insightful and a wider arrange of advice, including about legal, tax and real estate investments.

One of the reasons that brokerage firms have been aggressively expanding the financial center is because of the increasing number of customers who are switching to digital investment services.

Last year the number of people who traded their stocks through the online home trading service (HTS) and mobile trading services (MTS) accounted for 80 percent, meaning those who place orders through phones or personally visiting their stock brokers have been significantly shrinking.

As profits have shrunk through the expansion of digital trades, the brokerage firms have been merging its branches to a single financial center as a cost cutting measure.

Also, brokerage firms have been increasing their sales toward small and medium-size companies as their new revenue source.

“Until now financial companies have been centering its sales on high-income clients with various services,” said Yang Cheon-woo, head of NH Investment & Securities’ financial center in Samseong-dong, Gangnam. “But there’s a limit.”

He said the financial center will expand sales from conglomerates that were mainly the role of the corporate sales team at the brokerage firm’s headquarters to small and medium companies.

In order to reach small and medium companies, the brokerage firms have been erecting their financial centers mostly around Gangnam station and Samseong-dong.

NH Investment & Securities last month opened up its Samseong-dong center located at the Parnas Tower by combining three branches -Teheranro, GS Tower and Hanti station. It now has 66 employees, which 15 percent are in charge of corporate sales.

“The team is consisted of employees from headquarters’ corporate sales specializing in investment banking, bonds and retirement pensions,” said Lee Jae-ho, head of the center’s corporate team. “We are also providing professional consulting on IPOs and capital increases.”

Samsung Securities at the end of last year opened up large financial centers; one at the Military Mutual Aid Association building in Dogok-dong, Gangnam and another at Samsung Life headquarters in Seocho-dong, Gangnam.

Unlike the previous branches, where there were only 10 or so consultants, the two financial centers each have 100 or so employees.

“As low-interest rates continue, there have been a growing interest in corporate clients and for that reason we have been increasing our efforts on corporate consulting,” said a Samsung Securities representative.

“We have been able to attract 1.5 trillion won in investments as of the end of September last year through our CEO communities that we service such as CEO Forum and Leaders’ Club, which is more than double the investment made a year ago.”

Mirae Asset Daewoo, which successfully ended its merger with Daewoo Securities to become the country’s No.1 brokerage firm, has been increasing its sales of institutional investors, as well.

Its investment wealth management centers (IWC) that both provide asset management and corporate finance services will be opening this month.

Currently there are seven IWCs scheduled to open this year nationwide.

The first IWC to be launched will be located at the former Daewoo Securities’ headquarters in Yeouido, southwestern Seoul. Others are expected to open in Gangnam and in Pangyo, Gyeonggi, where there’s a cluster of IT companies.

The IWC plans to provide IPO and corporate bond issuance services as well as asset management of employees of companies that it has business ties with through its retirement pension services.

Analysts say companies have to change how it handles its asset management.

“Eighty percent of the companies are managing [their corporate finance] by placing them in a 1-year maturity deposit,” said Jeong Bum-sik, who heads Samsung Securities’ team in charge of bonds. “At a time like this when the interest rates is exceptionally low in the 1-percent range, this is a [primitive] management method, which is like storing the money in a safe.”

He said there’s a need to benchmark the investment portfolio off Japanese financial institutions during the 20-year depression.

When the Japanese economy thrived in the 1980s and banks’ interest rates were high, Japanese financial companies focused half of their corporate businesses in loans, and when the value of properties rose, they invested 6 percent of their assets on real estate.

But when the bubble burst in 1990 and property values tumbled, Japanese financial institutions started changing their investment portfolios. This included shrinking their loan businesses while increasing bond investments. They also diversified in shoring up treasuries and overseas bonds while significantly lowering their real estate investments.

“As property values have been shrinking and companies starting restructuring, Korea could face a similar situation as Japan’s 20-year depression,” said Jeong of Samsung Securities. “Long-term investments should be investing in long-term treasuries or inflation-index bonds while short-term investments should be made in new growth industries such as businesses targeted toward elderly consumers or new technologies.”

“Many companies show uncertainties on long-term [investment] management as they may need in case of emergency,” said Kim Kyung-shik, a manager at Mirae Asset Daewoo. “We have developed products that have factored in such concerns of Korean companies that have reduced the time of investment while resulting in profits exceeding bank interest rates.”

One of such popular product has been a short-term bond investing in the real estate developments in Gwangyang Bay in Yeosu, South Jeolla.

It is an investment bond with a maturity of one year or less but promises a 2 percent yield every three months. It also comes with a condition that Mirae Asset Daewoo will repurchase the bonds from investors if the real estate development faces problems.

In the two days since the investment bond was introduced, it sold 100 billion won. Half the investors were corporate clients.