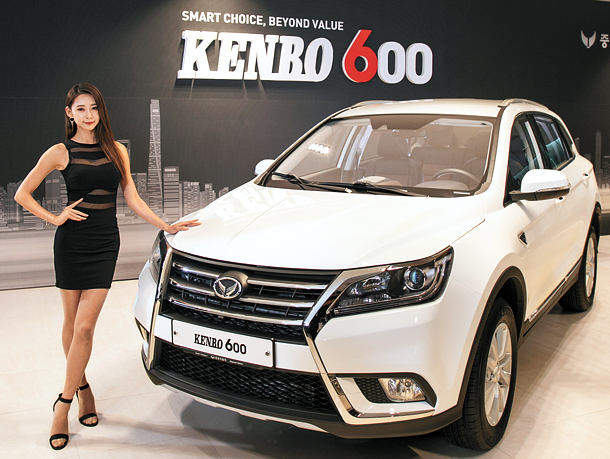 A model stands beside BAIC Motor’s Kenbo 600, the first Chinese passenger car to be sold in Korea, in this file photo from Jan. 18. Chinese automakers are making forays into the Korean market. [ZH MOTORS]

In Korea, “Made in China” was once synonymous with “Made Cheaply.” Those days are in the past.

As Chinese IT and semiconductor manufacturers - think Huawei and Xiaomi - are gracing the world stage and making a splash, automakers from Korea’s behemoth neighbor are vying to enter the local car market. Be it passenger, commercial or even electric cars, all types of vehicles are clambering in from across the East Sea this year, posing a challenge to Korean automakers that have long dominated the market.

The first one has already arrived, and it happens to be the first Chinese passenger car to sell in Korea. The Kenbo 600, a midsize gasoline SUV from BAIC Motor, one of China’s top five carmakers, was released in January through its Korean unit ZH Motors. The company said it hopes to sell 3,000 of the cars this year.

The question is whether it stands a chance in Korea’s competitive car market. The consumer response so far hasn’t been bad.

ZH Motors started receiving preorders last month, and the company expects all 120 Kenbo 600 cars that have arrived so far to sell out by March. The cars will hit Korean roads in June.

The Kenbo 600 is a midsize SUV in the C segment. Its Korean rivals include Hyundai Motor’s Tucson and Kia Motors’ Sportage. The basic trim will go for 19.99 million won ($17,400) with taxes, making the Chinese car cheaper than any competitor in the segment. The equivalent of Hyundai Motor’s popular Tucson starts at 22.4 million won.

The local distributor of BAIC Motor is confident in the car’s safety, probably the biggest concern among Koreans about Chinese-made cars. The car received the highest grade - five stars - from China’s New Car Assessment Program. It’s equivalent to the grade many Korean vehicles receive when they are exported to China.

The Kenbo 600 also boasts a 60 percent ultra-high-strength steel exterior, a higher level than any of its domestic rivals which barely surpass 50 percent level.

“The Kenbo 600’s launch is significant because it broke the final barrier that Chinese automakers had toward the Korean market,” said Kim Pil-soo, an automotive engineering professor at Daelim University. “Korean consumers have especially high standards for passenger cars. If the Kenbo 600 receives a positive response, it signals the possibility of other Chinese carmakers to advance into Korea’s passenger car market.”

Another strong Chinese player poised to launch in Korea this year is BYD, the world’s No. 1 electric carmaker. It established a Korean operation last October on Jeju Island and is speculated to launch an electric bus by the second half of this year.

Chinese commercial vehicles like pickup trucks will also take to Korean roads later this year. Dongfeng Motor Corporation, China’s leading carmaker, has submitted its 1-ton light pickup truck for emissions and noise tests with Korea’s Ministry of Environment. Its domestic rival will be Hyundai Motor’s Porter. Dongfeng’s pickup truck will become the only rival for Porter when it launches.

Yutong Bus, the top bus manufacturer in China, is planning to advance into Korea within the year with a 45-seat travel bus, according to industry sources.

Establishing a service center network will be vital for the Chinese automakers. ZH Motors has secured more than 80 stations in Korea so far and is planning to expand. Hantong Bus Korea, the local partner of Yutong Bus, said it would secure enough centers nationwide to replace defective auto parts within 24 hours.

“As long as the after-sales service is guaranteed, Chinese cars that are armed with low pricetags pose a big threat to Korean carmakers,” Kim said. In fact, Korea’s automotive industry has been seeing a growing number of Chinese cars. In 2012, there were 1,067 cars, all of which were commercial vehicles imported from China to Korea. The number jumped by 221.8 percent in 2015 to 2,367 cars.