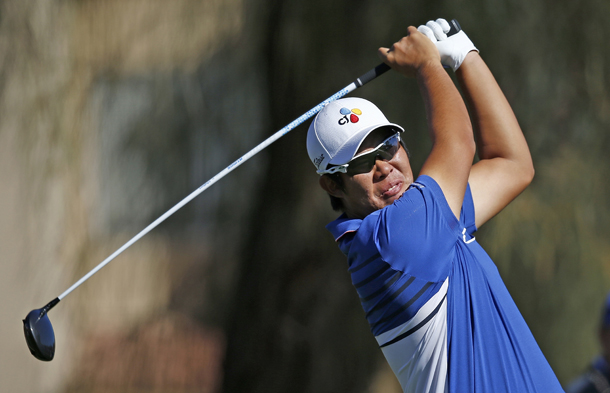 An Byeong-hun of Korea hits his tee shot at the second hole during the final round of the Waste Management Phoenix Open on Sunday in Scottsdale, Arizona. An finished sixth during the tourney. [YONHAP]

Korean An Byeong-hun has come up short of his first PGA Tour victory in Arizona with shaky play down the stretch.

An blew his lead in the final round of the Waste Management Phoenix Open at TPC Scottsdale in Scottsdale, Arizona, on Sunday (local time), finishing in sixth place at 14-under 270, three strokes out of a playoff between eventual champion Hideki Matsuyama and Webb Simpson.

An took a one-stroke lead into the final round at 16-under, with Martin Laird in sole possession of second place. But after rounds of 66, 66 and 65, An stumbled to a two-over 73 on the final day.

An was the 2015 European Tour Rookie of the Year on the strength of his victory at the BMW PGA Championship. He also played for Korea at the Rio de Janeiro Olympics last year.

An entered the tournament as the second-highest ranked Korean in the world at 47th, eight spots behind Wang Jeung-hun, the three-time European Tour winner.’

An traded three birdies with a bogey on the front nine but struggled to keep the ball in the fairway off the tee the rest of the way.

An bogeyed the 10th hole after his tee shot landed in a fairway bunker. Then at the 11th, he put his second shot into the water en route to another bogey. He then closed out his frustrating round with two consecutive bogeys at the 17th and the 18th.

Matsuyama, the 2016 champ, caught An with a birdie at the 13th and moved to the top of the leaderboard with another birdie at the 15th. He and Simpson got into a playoff tied at 17-under after 72 holes, and Matsuyama clinched his second straight title with a birdie on the fourth playoff hole.

Kang Sung-hoon, another Korean, tied for 12th at 11-under.