Zombie is back and bad as ever

Zombie is back and bad as ever 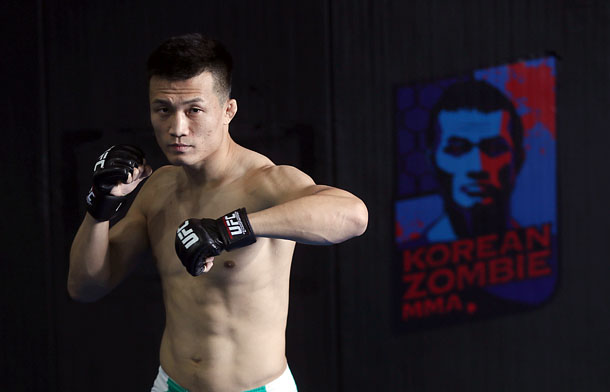 Back in the Octagon for the first time in over three years, Korean mixed martial artist and Ultimate Fighting Championship (UFC) fighter Jung Chan-sung clinched a knockout win over Dennis Bermudez on Sunday at the Toyota Center in Houston, Texas, a perfect way to declare his comeback.

Before the match took place on Sunday, experts and fans had low expectations, calling Jung the underdog as this was his first match since his TKO loss to Jose Aldo in August 2013. During the past three years, Jung has been fulfilling his military service, which limited him to training only one to two hours per day. Some UFC fighters even said such an extended absence could end his career.

The bout with the American was the main event of the night. Jung got off to a slow start as he allowed a few punches and kicks from Bermudez. Jung had expected Bermudez to be a swarmer rather than a slugger, but it didn’t take long for Jung to get back into tournament mode. Bermudez, a former wrestler who is known for his takedowns, was unable to land a critical blow.

The conclusion came in the blink of an eye. Bermudez threw a left jab and ducked to avoid the counter, but Jung landed an uppercut and the referee stepped in. Despite low expectations, Jung finished the fight in 2 minutes and 49 seconds in the first round. “It was another highlight-reel win for Jung,” reported FoxSports, “who has picked up a slew of impressive finishes in his last four wins inside the Octagon - all coming by way of knockout or submission.” 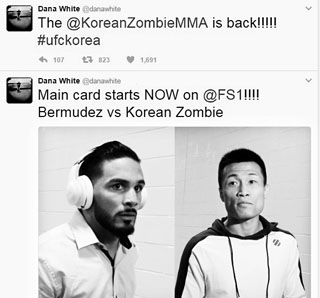 Dana White, President of the Ultimate Fighting Championship, tweeted that the “Korean Zombie is back.” [DANA WHITE TWITTER]

Bermudez only had two KO losses in 22 fights since his debut.

“I’m human too, so there were times when I thought, can I keep up with the game, can I keep developing my techniques? Now I feel like I’m about to cry,” Jung was quoted as saying after the match by MMA Junkie. “I’ve changed the way I think about the game of fighting, so I was actually expecting and planning for a five-round decision. But I thought if I can catch the knockout or submission, even better.”

Although the fight was held in Texas, Jung had as many fans as Bermudez, who all came out to witness his return and root for the Korean Zombie.

Fans screamed and some were even spotted dressed as zombies while waving the Korean flag.

With the win, Jung’s UFC record has improved to four wins and one loss, and his MMA record is now 14 wins and four losses.

“My goal is always to be the champion, and I think this fight has put me back in the game,” Jung was quoted as saying by MMA Junkie.

On top of his $40,000 win, Jung earned an additional $50,000 as his outstanding win was selected as the “performance of the night.” Even better, Jung entered the rankings, which now allows him to re-sign for better conditions.