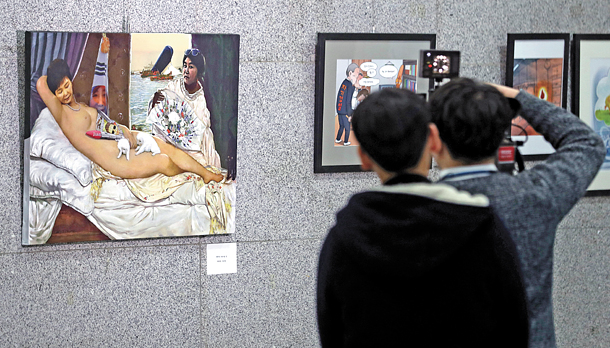 A satirical painting titled “Dirty Sleep,” which depicts President Park Geun-hye naked, hangs on a wall of the lobby of the lawmakers’ office building attached to the National Assembly in Yeouido, western Seoul, on Jan. 24. [YONHAP]

The controversy over the satirical painting “Dirty Sleep,” which depicts President Park Geun-hye in the nude and was briefly on display in the Lawmakers’ Office Building of the National Assembly, is still ongoing, even after artists withdrew the piece from the exhibition on Jan. 24.

The reactions to the painting were mixed even among liberals, as questions were raised over whether the satire was misogynistic. Korean Womenlink, a major liberal women’s rights group, said, “Satire that makes use of the target’s gender, race or physical disability is no more than mean violence.”

On Thursday, the Democratic Party, the main opposition party, suspended the lawmaker who was in charge of the exhibition, Pyo Chang-won, from any party posts for six months. President Park’s party, the Saenuri Party, then harshly criticized the disciplinary action for being “too light.”

On the other side, several liberal artists’ groups issued a statement on Monday demanding Pyo’s punishment be withdrawn, citing freedom of expression. They also denounced a group of Park supporters who angrily damaged the painting in protest on Jan. 24.

From left, 19th-century French artist Edouard Manet’s “Olympia”(1863), regarded as an epoch-making painting by many art historians; “Sleeping Venus”(1510) by Giorgione, a master of the Italian Renaissance’s Venetian school; and another master of the school Titian’s “Venus of Urbino”(1538), which inspired Manet.

When I first saw the painting on Jan. 24, I didn’t know what to make of it. To me, it was neither good satire nor a good art piece. However, freedom of expression is a precious base for democracy. Shouldn’t politicians, who are regarded as public figures, accept the fact that they might be subject to satire?

But something told me that I couldn’t let this piece off the hook, either. Even as a public figure, the fact that Park is a woman troubled me. I’m not saying that women deserve special privileges over men. If this were a country that had been throwing all sorts of satire at politicians regardless of gender, I would not have cared much whether the president was a woman or not.

But in a country where I have no memory of seeing a former president or male politician become victim to bare-chested satire, this piece of work, with a female president stripped of her clothes, coupled with the fact that sexual objectification and harassment is still much more prevalent toward women than men, did not put my mind at ease.

As I was going back and forth on my own, I invited reporters at the Korea JoongAng Daily’s culture desk for a little debate on the issue. One thing we all agreed on was that this satire could not be labeled as good art in its quality. However, on the issue of sexual discrimination, opinions differed. “Public figures are subject to satire whether it has a sexual connotation or not,” they said. “Extra protection because she is a female president can be regarded as reverse discrimination.”

On the other hand, fellow reporters were more concerned than I was about the fact that this “art” was part of an open exhibition in the legislative building and hosted by an opposition party lawmaker. It is acceptable when artistic satire is done outside the halls of power. When it is used and assisted by a politician in the party opposing the sitting president, in a place of political strife, it can be interpreted as a political tool wielded by a group with power, they said.

Through our debate, we gathered our thoughts and concluded that while the aforementioned points were disturbing and unpleasant, the work was not crossing lines in terms of freedom of expression, and “Dirty Sleep” should be acknowledged in regards to that.

First, let’s look at why the culture desk was not convinced of the quality of “Dirty Sleep.”

As some may have noticed, “Dirty Sleep” is a parody of an 1863 painting, “Olympia,” by the French master Edouard Manet. The problem lies in the fact that there are no similarities between the two pieces in theme or implication, only in the criticism invoked when both works are presented.

“Olympia” has its place in history books for two reasons. First, it is regarded as a revolution in terms of structure, according to art critic and historian Clement Greenberg. The tradition in Western art that carried on until “Olympia” was to utilize precise shading and perspective to create an illusion of being three-dimensional in a two-dimensional canvas. Manet boldly discarded that tradition and “declared the flat surfaces on which they were painted” with “Olympia.”

Second, it was a revolution in content. It is well known that this masterpiece was heavily criticized upon its introduction. In an age where nude paintings were prevalent ever since the Renaissance, why was this piece in particular condemned? The fact lies in that nudes of yesteryear were based on Venus, the god of love, sex, beauty and fertility, as well as other goddesses and nymphs in Greek and Roman mythology. In truth, the models for these pieces were the lovers of powerful men or of the artist, or they were high-class prostitutes. When the works were bestowed with the name of Venus or other goddesses, these nude paintings became art, not obscene graphics.

Manet got rid of this hypocrisy and titled the piece “Olympia,” a common name for prostitutes in 19th-century France. The overall composition of the painting is reminiscent of Renaissance greats like Giorgione’s “Sleeping Venus” and Titian’s “Venus of Urbino,” but it differed in that a prostitute appeared rather than Venus. Spectators of that time criticized the introduction of a prostitute, and English art historian T. J. Clark had this to say about the reception: “Even though prostitutes are closest to appearing nude in reality, spectators only wanted nude in a fictional setting.”

Moreover, contrary to Venus in Giorgione’s work, who has her eyes shut, and Venus in Titian’s work, who looks at the spectators with embarrassed yet sensuous eyes, Olympia in Manet’s painting daringly and confidently holds her head high, staring right into the viewers. That confidence was enough to startle the spectators, who looked at nude paintings of goddesses and nymphs in the name of “sophisticated mythological art appreciation” in a voyeur manner. This feat was “Olympia’s” ultimate revolution.

Now, why does “Olympia” have anything to do with the scandal involving President Park Geun-hye and Choi Soon-sil, which “Dirty Sleep” attempts to satire? Furthermore, while the overall composition of “Dirty Sleep” and Choi Soon-sil’s placement in the work follows that of “Olympia,” the body of President Park isn’t the bold Olympia we know, but it is Venus from “Sleeping Venus” by Giorgione. Perhaps it was an attempt to portray the allegation that President Park was taking a nap while the Sewol ferry was sinking. To put it bluntly, the artist took the easy way out. The artist didn’t care to make connections to the original work’s themes or significance and only cropped the painting out, possibly due to the piece’s popularity. There is no sign of variations or a tweak in the parody, proving this work to be that of an amateur.

If the artist wasn’t going to use the piece’s significance or meaning, why did he choose to go with a nude piece? Seeing no ties to the original piece, it’s safe to say that the artist was just attempting to be sensational and intentionally make an issue out of it. This adds to our conclusion of this art being one-dimensional and a low-standard parody. A nude satire always runs the risk of being accused of defamation, but if the art’s meaning carries appropriateness of having to be nude and is a witty sarcastic remark that brings artistic results, the social value of the artwork has the power to offset related controversies. But “Dirty Sleep” doesn’t really give any special reason as to why the artist needed to allude to the masterpiece “Olympia.” That is why it’s troubling to see this as a respectable work of art.

But to restate our conclusion from our previous debate, we believe freedom of expression regarding political satire is a right that should be guaranteed. The judgement of the painting lies in each and every critic, spectator and member of the public, and to arbitrarily censor and filter art before its release is to harm democracy and the artistic possibilities and capabilities that come with an unconstrained climate.

I didn’t rate “Dirty Sleep” as an acceptable satire, but I believe the debate surrounding this issue can be positive. It can advance political satire, art and, ultimately, our democracy. Unfortunately, the debate isn’t really forming in that direction.

On Jan. 24, a few members of a politically conservative group barged into the National Assembly building, threw “Dirty Sleep” to the ground and repeatedly stepped on it. This is vandalism. Rather than physically manhandling this work of art, wouldn’t it have been better if they were to make a satire of a satire or stage a guerilla performance in the building, at least stand up and fight back in an artistic manner?

There were opposing satires created on internet forums. But the target seemed off. It was not lawmaker Pyo Chang-won but his wife and daughter. Why were they cropping the face of Pyo’s wife’s on a naked body and, almost inexplicably, his underage daughter as well?

On Jan. 25, a group representing female members of the Saenuri Party protested in front of the National Assembly with picket signs saying, “Pyo, we will strip your wife naked, too.” Why isn’t it, “I’ll strip you, too, Pyo,” instead of “Pyo, we will strip your wife naked?” Why is it the females that always need to be stripped? This is the kind of limitation we see in a society perverse with the objectification of women.

“Dirty Sleep,” coupled with society’s prevalent sexual objectification of women and the scarcity of nude satire spearing male politicians in Korea, is very disturbing in that it carries a nuance of gender discrimination. The fact that President Park is a public figure that needs to withstand all types of satire and mocking makes the issue of “Dirty Sleep” quite an ambiguous and difficult one.

But one thing is clear: Pyo’s wife and daughter are not public figures. Why “strip” these innocent females and reproduce the sexual objectification of women?

Now that “Dirty Sleep” has been released to the world, the debate and controversy should move in the direction of advancing art and society. That doesn’t seem to be the case right now.