Jong-un versus The Donald

Jong-un versus The Donald 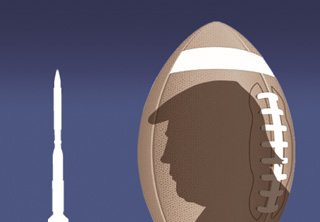 While our attention is captured by the Choi Soon-sil scandal and the anticipation of an early presidential election, North Korean leader Kim Jong-un and the Donald Trump administration are escalating tensions on the Korean Peninsula. The situation is in peril, like a string on a bow that will snap if stretched any further. Kim’s demonstration of power through nuclear and missile developments and the U.S. consideration of a preemptive strike on the North remind us of two trains heading toward each other on the same track.

When Kim said the North was in the final stage of conducting tests of an intercontinental ballistic missile (ICBM) during the U.S. presidential election, Trump wrote, “It won’t happen.” The missiles Kim talks about — the KN-08 or KN-14 — have a range of up to 12,000 kilometer (7,456 miles), which means they are capable of targeting New York and Washington D.C. on the U.S. east coast. What Kim needs to complete is the reentry technology of the ICBMs, which is expected to be finished in two to three years.

This appears to be why the Trump administration is considering a preemptive strike, regime change and the assassination of Kim as policy options. Defense Secretary James Mattis, who visited Korea last week, and other officials with perspectives that are more hardline than the neoconservatives of the George W. Bush administration, are pushing forward security policies for the Trump administration.

They might be thankful to Kim. The United States has never had an opportunity to operationally use countless interceptors deployed on AEGIS-class ships in Alaska and the Pacific Ocean. They want to test the interceptors against the North’s mid-and long-range missiles to prove their capability. Mattis visited South Korea as his first destination since inauguration not just to confirm the early deployment of the Terminal High Altitude Area Defense (Thaad) antimissile system and the agreement between Seoul and Washington to deploy U.S. strategic assets. His visit probably was intended to explore how the two new governments of the two countries will fundamentally resolve the issue of the North, which is on the threshold of deploying its nuclear missiles in real battle.

Coinciding with Mattis’ visit, General Lee Soon-jin, chairman of the South Korean Joint Chiefs of Staff, and General Joseph F. Dunford Jr., chairman of the U.S. Joint Chiefs of Staff, had a telephone conversation to bolster the combined defense posture through the U.S. deployment of strategic assets to the Korean Peninsula. The upcoming Korea-U.S. Key Resolve joint military drill scheduled for March is a natural opportunity to demonstrate a show of force through the U.S. carrier fleet and advanced strategic bombers to the North. Kim needs to go the final mile to complete his ICBM technology, while the Trump administration must prevent Kim from taking that last step.

Kim is now facing a dilemma. In his New Year’s address, he said the country is perfectly ready with its military technology. To prove the veracity of his remarks to his people and the rest of the world, he has to fire KN-08 or KN-14 missiles, or even the mid-range Musudan missile capable of reaching U.S. bases in Guam.

However, Kim is afraid of Trump. A tyrant understands another tyrant. Trump is building walls along the U.S.-Mexico border despite opposition at home and abroad and issued an order to ban the entry of citizens from seven majority-Muslim countries. He also declared trade wars against China, Japan and Germany. If Kim fires missiles toward Trump’s United States, he will invite a firestorm. Probably due to the dilemma, the Korean and U.S. intelligence authorities’ predictions about the timing of the North’s missile tests have been repeatedly wrong.
Fortunately, sunshine will soon fall into the dark tunnel between the United States and North Korea. The United States provided humanitarian aid worth $1 million through Unicef last month. The New York channel between the North and the United States is open again. Meaningful contact may take place later this month.

Kim must restrain himself. Trump is a merciless president. South Korea and the United States also need to review a plan to downscale the joint military drill in March.

The expected sequence of a preemptive strike on the North, followed by the North’s retaliation and a war triggered by South Korean and U.S. counterattacks and the North’s nuclear attacks on the South and Japan is proof that we can hardly allow the madness of Kim and Trump to define the current situation. A preemptive strike must only be made when there is a definite sign of a North Korean attack. The United States must not make its judgment on this sign alone. South Korea must participate from the beginning.

Before a new government is put into place in Seoul, there must not be a physical conflict on the peninsula, whether it is a localized or full-scale one, due to an action and reaction between the North and the United States. The Korean Peninsula must never be a training ground for the schemes of a hardline security team in Washington or a testing field for their advanced weapons.

The world is recoiling because of the unpredictable Trump. Trump, an entrepreneur of capitalism, wants to raise tariffs, build walls on the border and start a campaign against globalization. Xi Jinping, a communist, is now a champion of the liberal economic order.

Here is a word of wisdom to Kim. If you play crazy with your missiles against an unreasonable guy like Trump, you will get fatally burned.